Grand Palace and the Temple of Emerald Buddha 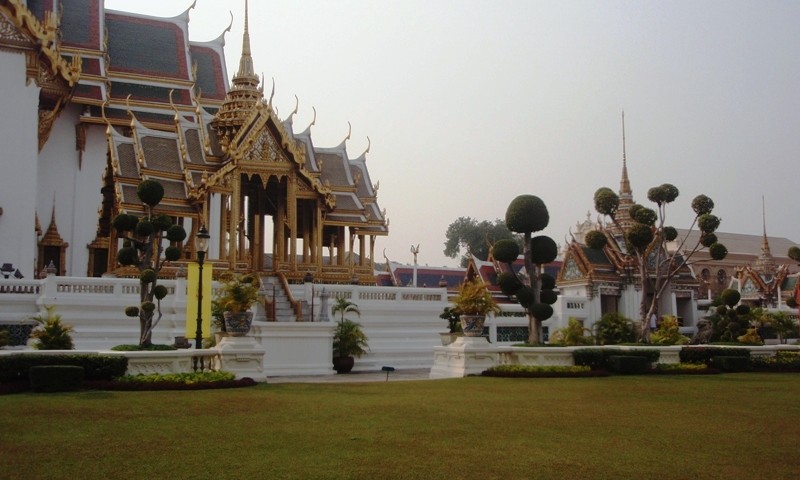 If there is one must-see sight in Bangkok, it’s the spectacular Grand Palace. It is the city’s most famous landmark. The Grand Palace is most sacred site in Thailand, so visitors must be properly dressed before being allowed entry to the temple. Men must wear long pants and shirts with sleeves. If you’re wearing sandals or flip-flops you must wear socks. Women must be similarly modestly dressed. No see-through clothes or bare shoulders. If you show up at the front gate improperly dressed, there is a booth near the entrance that can provide clothes to cover you up properly (a deposit is required).

When we came there, my friend had short pants. A guy by the gate was forceful in stopping him from entering. We noticed there is a booth near the entrance that can provide clothes to cover you up properly for a 200-baht deposit, but it is refundable. We were lining up for a wardrobe change. If you want to save your time, come to Grand Palace already properly dressed. The Grand Palace is open every day from 8:30 a.m. to 3:30 p.m. Admission Fee is 500 THB.

The Grand Palace was built in 1782 and for 150 years was home of the Thai King, the Royal court and the government administrative seat. Today the complex remains the spiritual heart of the Thai Kingdom. Thai Kings stopped living in the palace in twentieth century, but the palace complex is still used for other ceremonial and auspicious happenings. The Grand Palace has beautiful architecture and is a collection of highly decorated holy buildings and monuments. 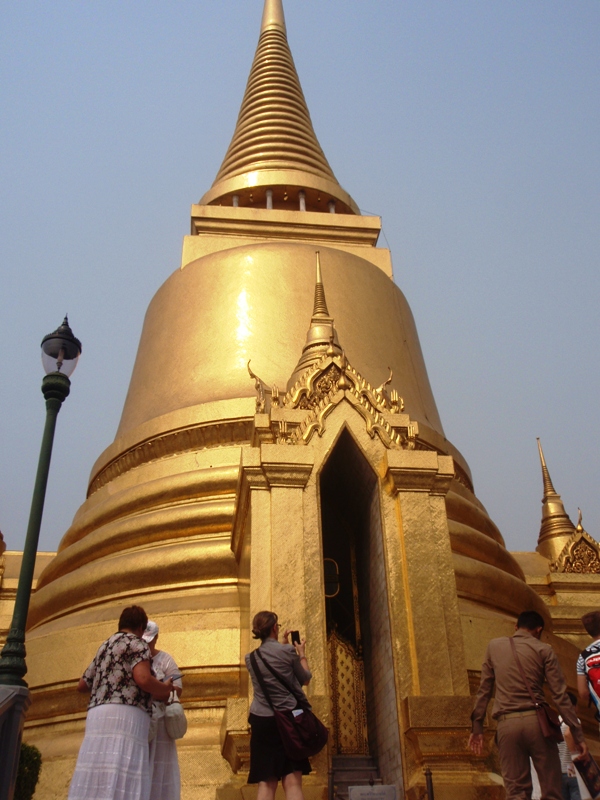 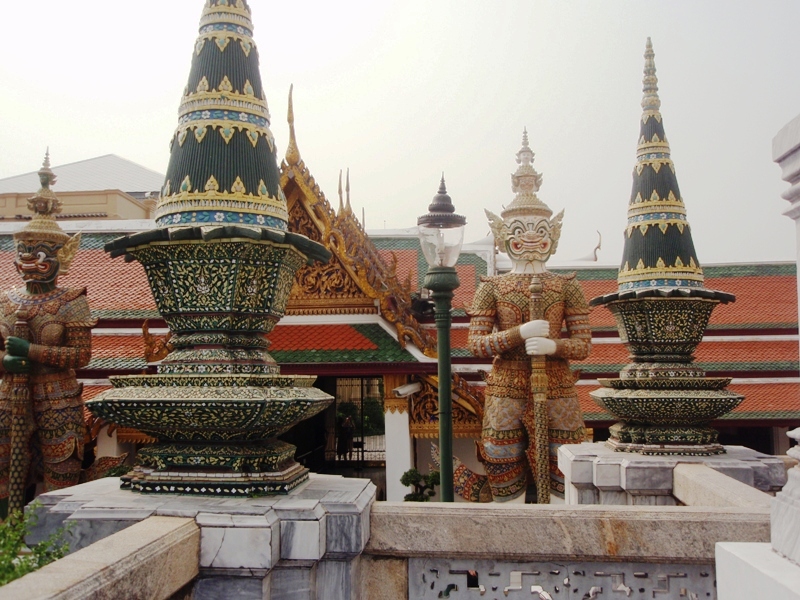 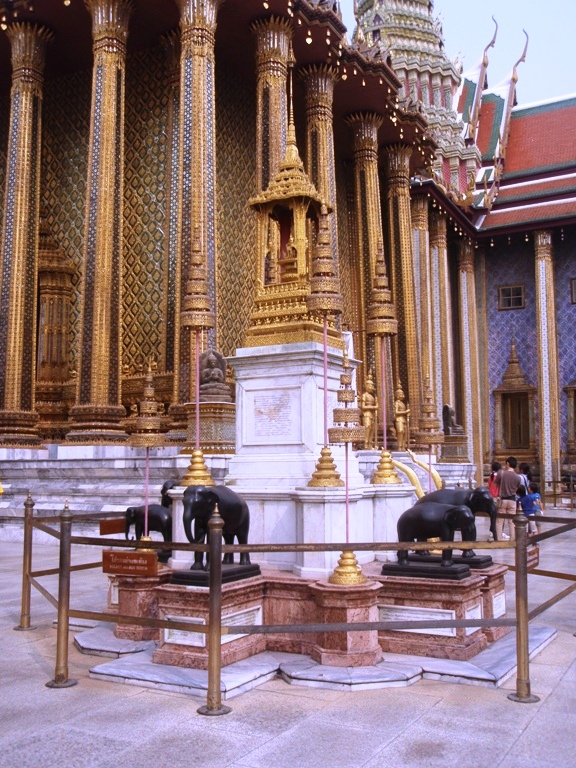 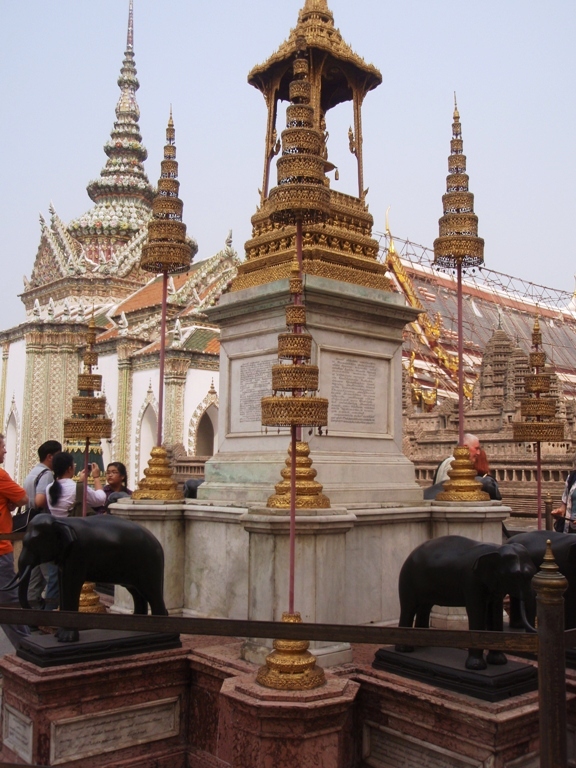 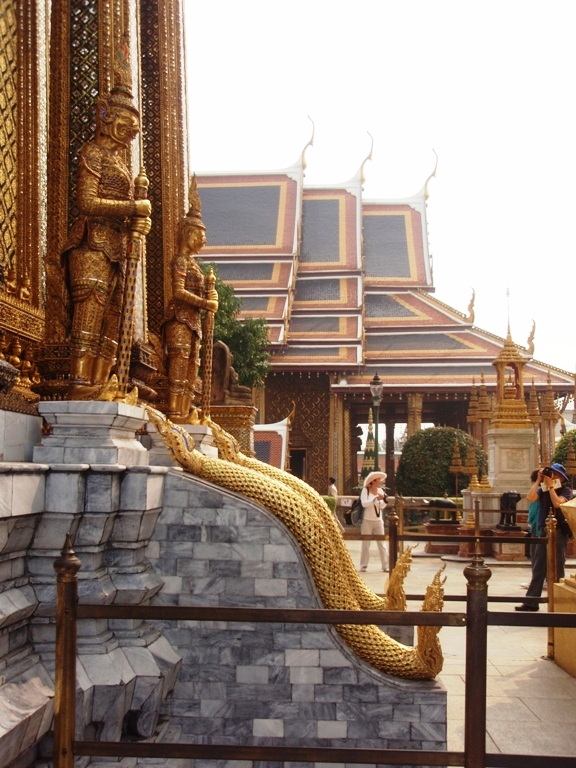 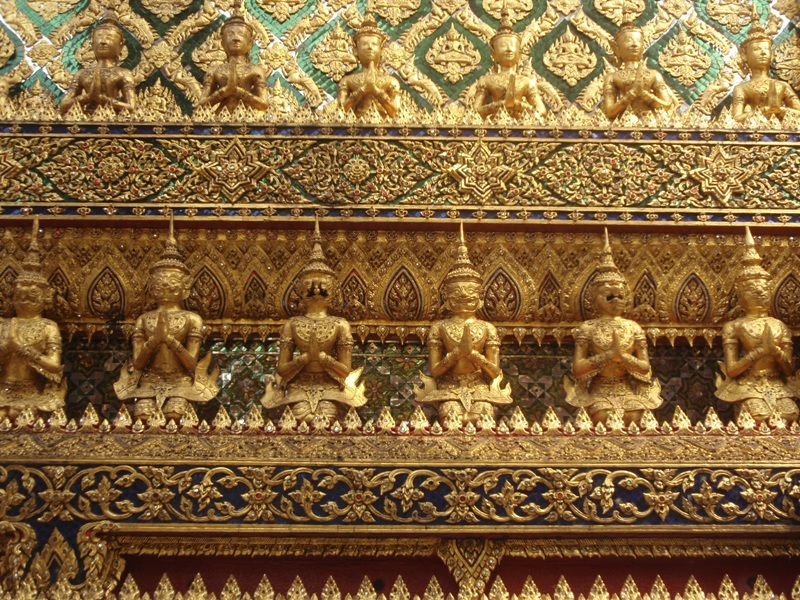 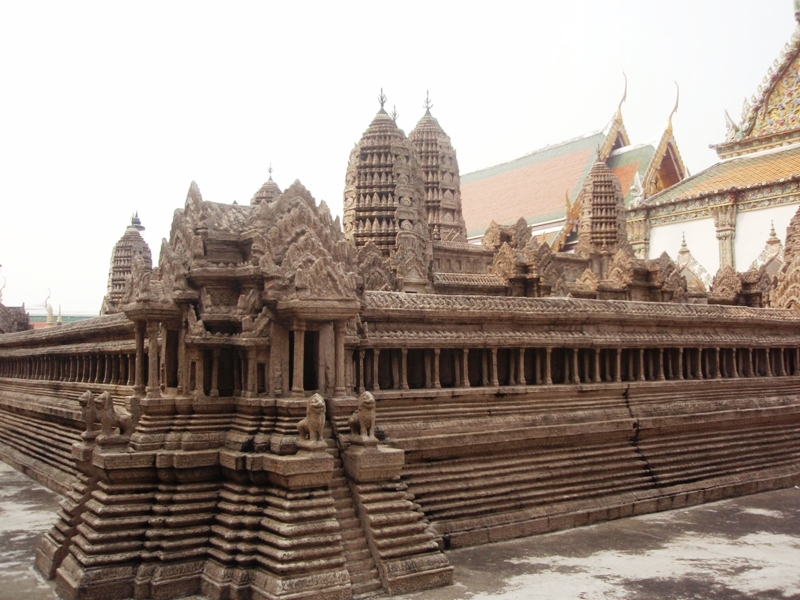 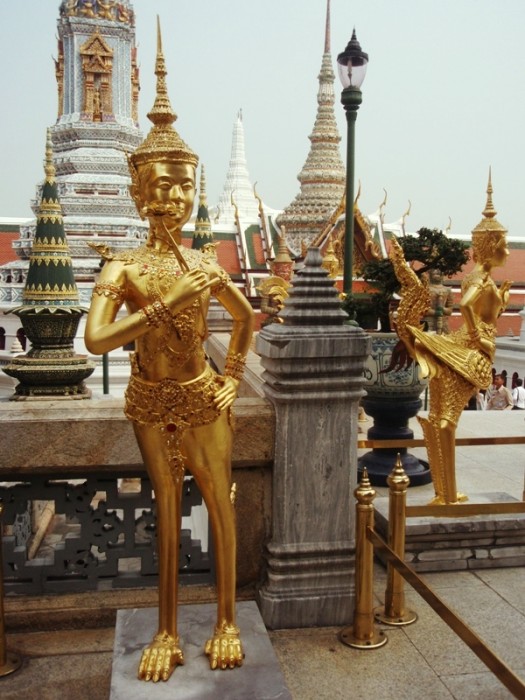 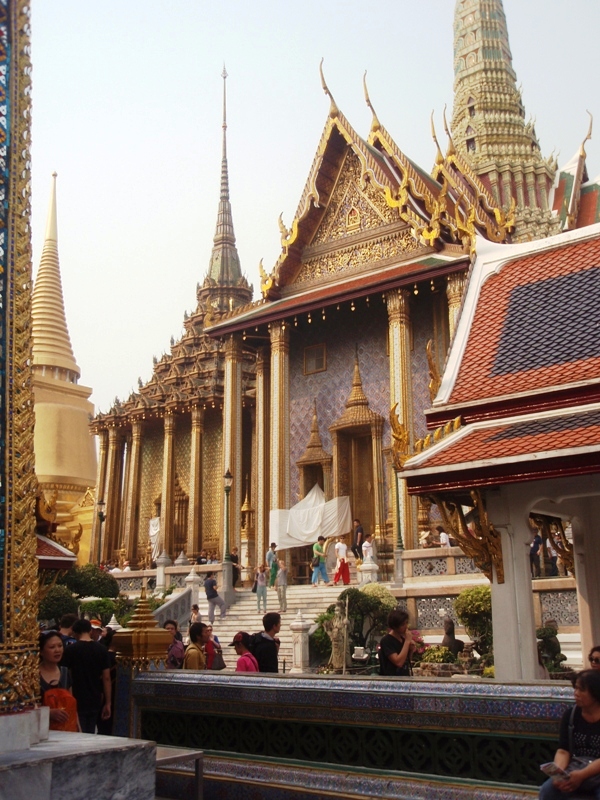 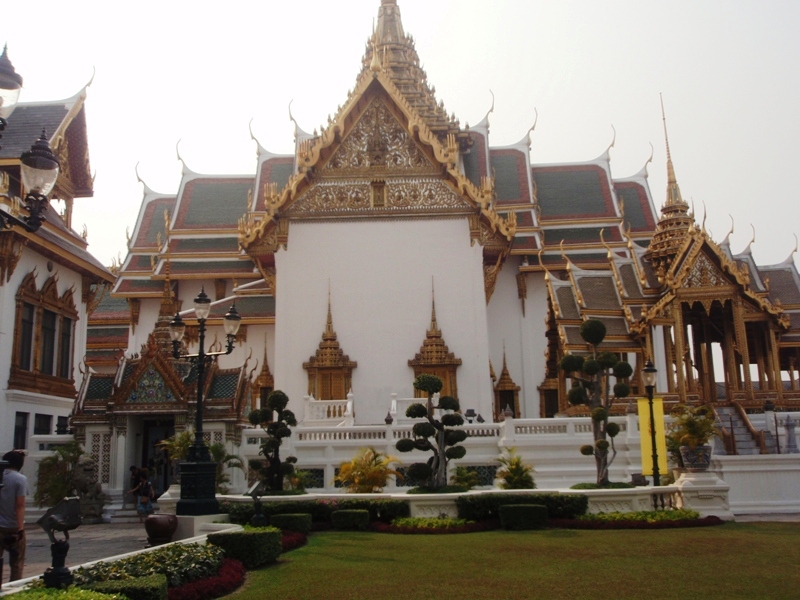 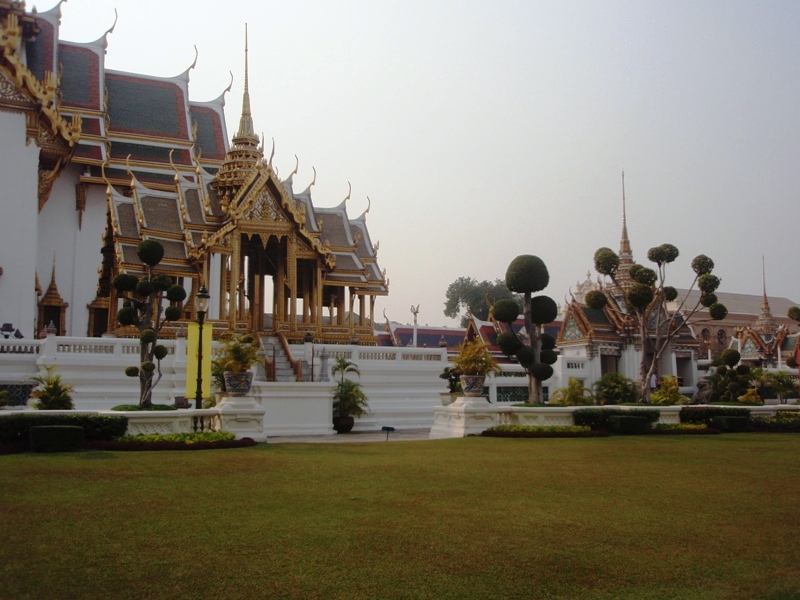 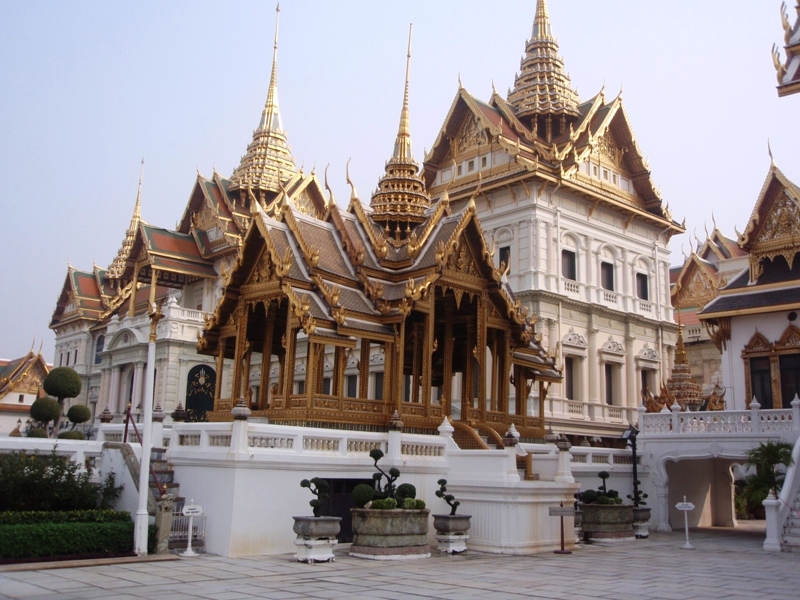 Within the palace complex are several impressive buildings including Wat Phra Kaew known as the Temple of the Emerald Buddha.  Wat Phra Kaew contains the small, very famous Emerald Buddha that dates back to the 14th century. It is the most sacred Buddha image of Thailand. It is a figurine of the meditating Buddha seated in yogic posture. It is made of green jasper and clothed in gold. It is about 76 cm tall.

According to belief, the Emerald Buddha is ancient and came from Sri Lanka. However art historians generally believe that it was crafted in 14th-century Thailand. The Buddha image has traveled extensively over the centuries. Emerald Buddha was once kept covered in plaster in a monument in Chiang Rai. But a damaging lightning storm in 1434 uncovered the treasure. The king of Chiang Mai tried hard to procure the statute, but three times the elephant transporting the statute stopped at a crossroads in Lampang. Taking it as a sign from the Buddha, the statue was placed in a monumental temple in Lampang. It stayed for 32 years there.

The next king of Chiang Mai wanted to bring the Emerald Buddha to his city. It was in a temple there until 1552, when Laotian invaders took it. The statue stayed in Laos for 214 years, until General Chakri brought it back to the Thai capital at Thonburi after his successful campaign in Laos. When he moved the capital across the river to Bangkok in 1784, King Rama I installed the precious figure in its present shrine. It has remained as a tangible symbol of the Thai nation. It is believed that removal of the image from Bangkok will signify the end of the Chakri dynasty. 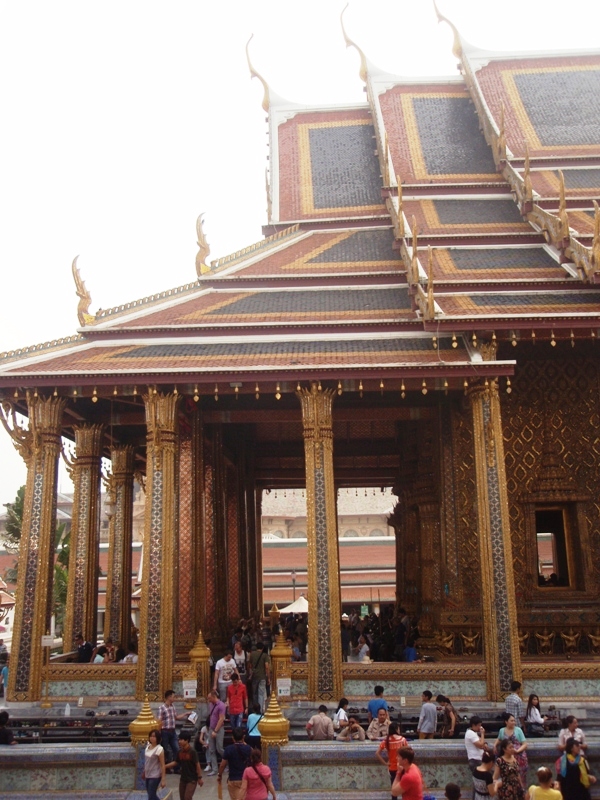 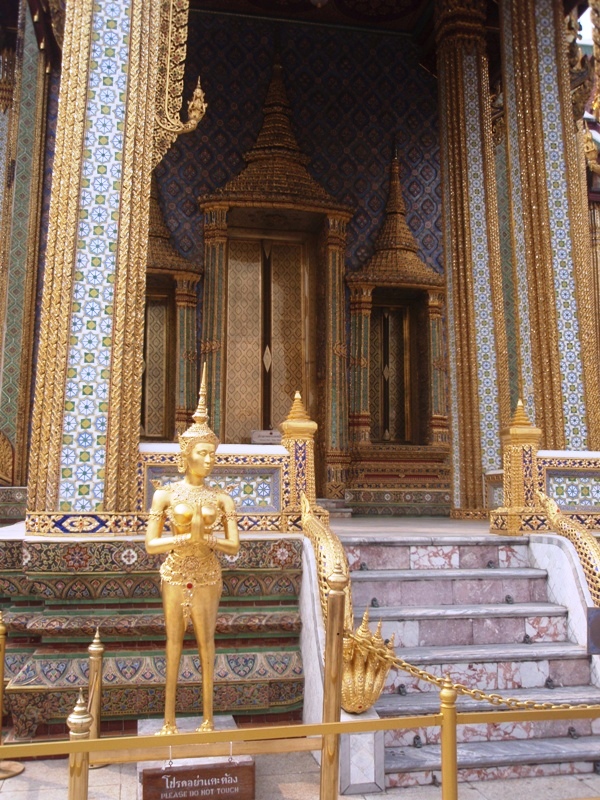 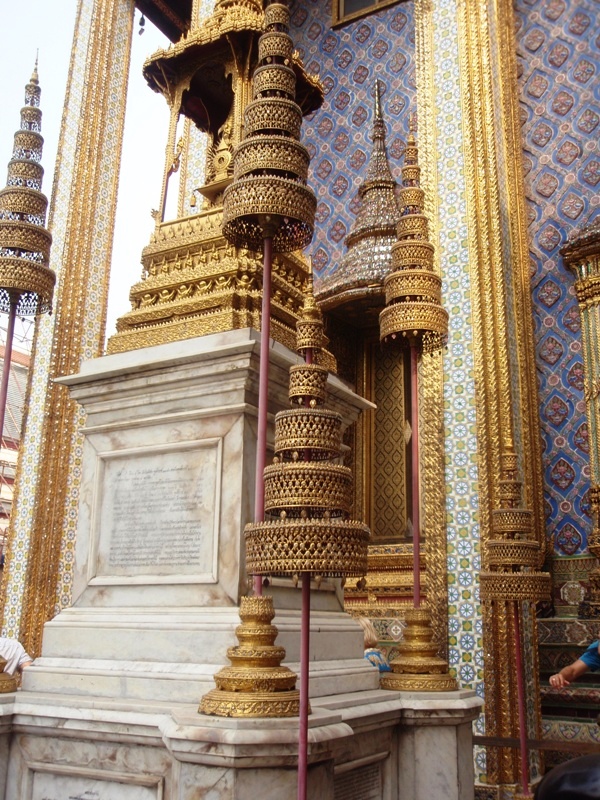 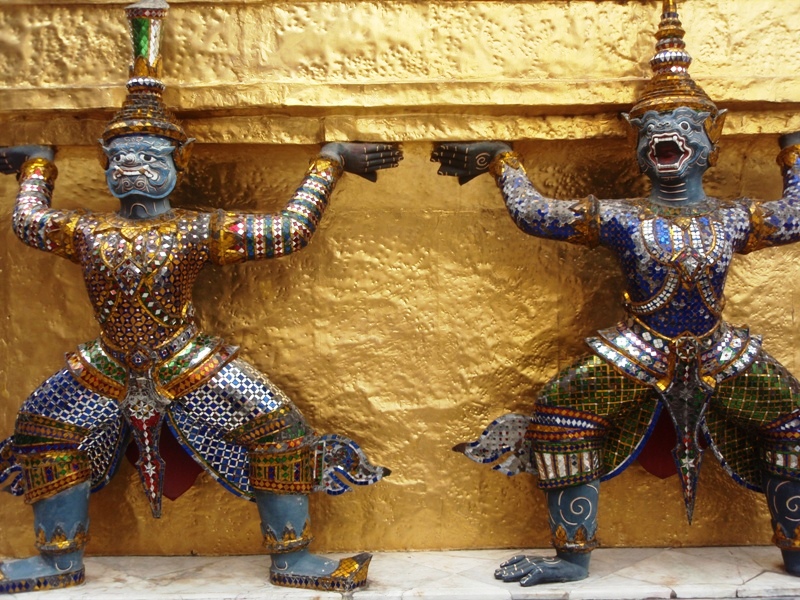 The Emerald Buddha is adorned with three different sets of gold clothing. Clothing is changed by the King of Thailand or a liaison in a ceremony at the changing of the seasons. The three sets of gold garments correspond to Thailand’s summer season, rainy season, and cool season. The sets of gold clothing not in use at any given time are kept in the nearby Pavilion of Regalia, Royal Decorations and Thai Coins on the grounds of the Grand Palace, where you may view them.