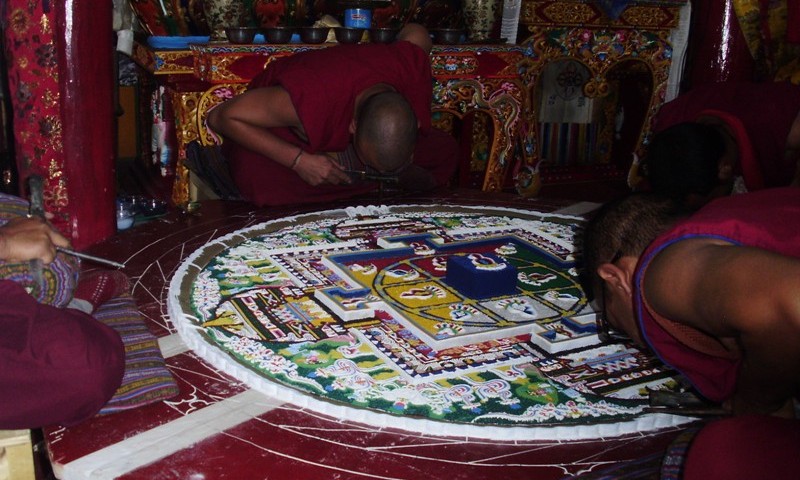 When I entered to the room where the monks build sand mandala in Spituk monastery, I did not believe my eyes. I have never thought I will see it in my life. The best part was that I saw it directly in their natural environment in a Buddhist monastery in the Himalayas and not like tourist attraction. I was alone with monks in the room without the crowds of tourists. Production of sand mandalas for me is so interesting that I decided to write article about that and describe the most basic facts of these sand mandalas.

What is sand mandala created by monks?

The Sand Mandala is a Tibetan Buddhist tradition made from colored sand. Monks create and ritualistically destroy to symbolize the Buddhist doctrinal belief in the transitory nature of material life. 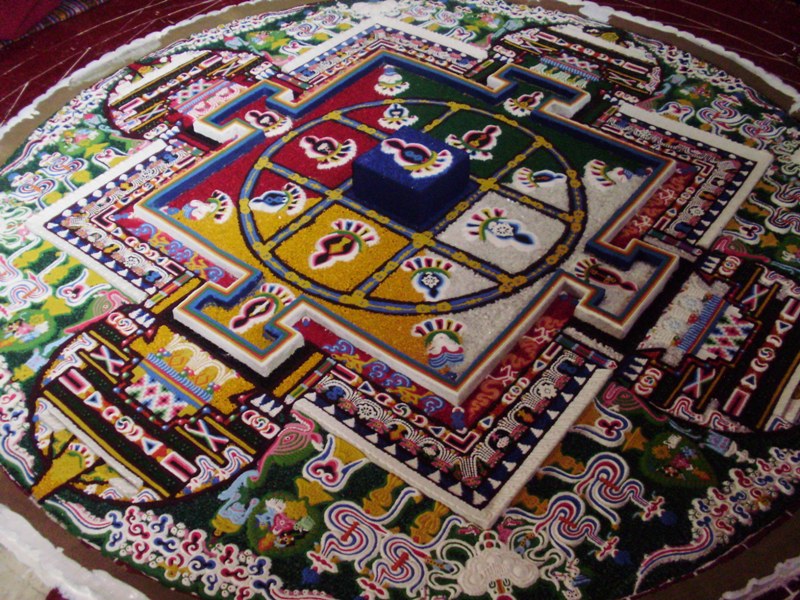 What materials are used to make sand mandala?

In the past the mandala was not created with granules of crushed colored stone. In these days, white stones are ground down and colored with opaque inks to achieve the same effect. The colors are usually made with naturally colored sand, white crushed gypsum , yellow ochre, red sandstone, charcoal, and a mixture of charcoal and gypsum – blue. Mixing red and black make brown, red and white make pink. 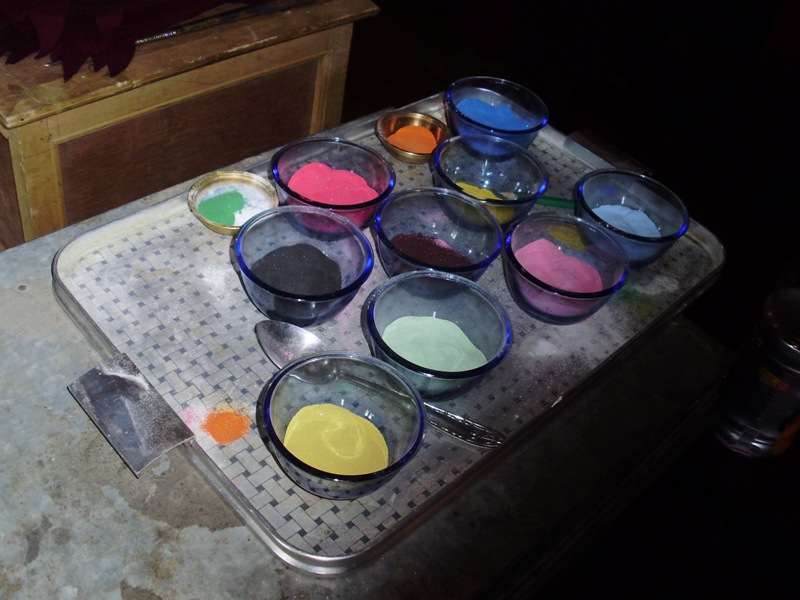 How is  sand mandala created?

At first the monks draw the geometric measurements associated with the mandala. The sand granules are then applied to mandala using small tubes, funnels and scrapers, called chak-pur.  It usually takes several weeks to build sand mandala due to the large amount of work with intricate details. Usually team of monks will work together on the mandala, creating one section of the mandala at a time and working from the centre outwards. 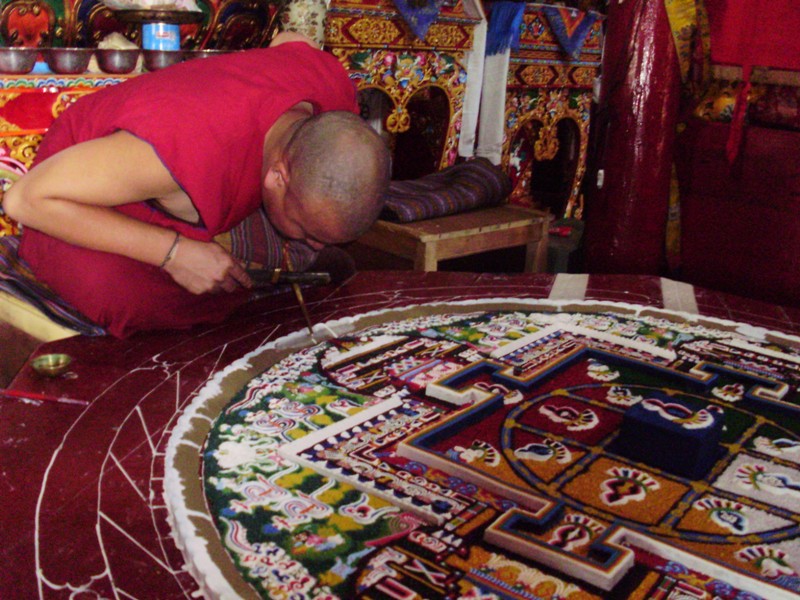 For instance the famous Mandala – Kalachakra contains 722 deities portrayed within geometry of the mandala. Other smaller mandalas, like Vajrabhairava contain fewer deities and require less geometry, but it still takes several days to complete. Like all mandalas, also these sand mandalas are meant as two-dimensional representations of what is supposed to be a three-dimensional environment. There are only two particular cases where a three-dimensional mandala can be seen: Borobodur in Java in Indonesia and Angkor Wat in Siem Reap in Cambodia. 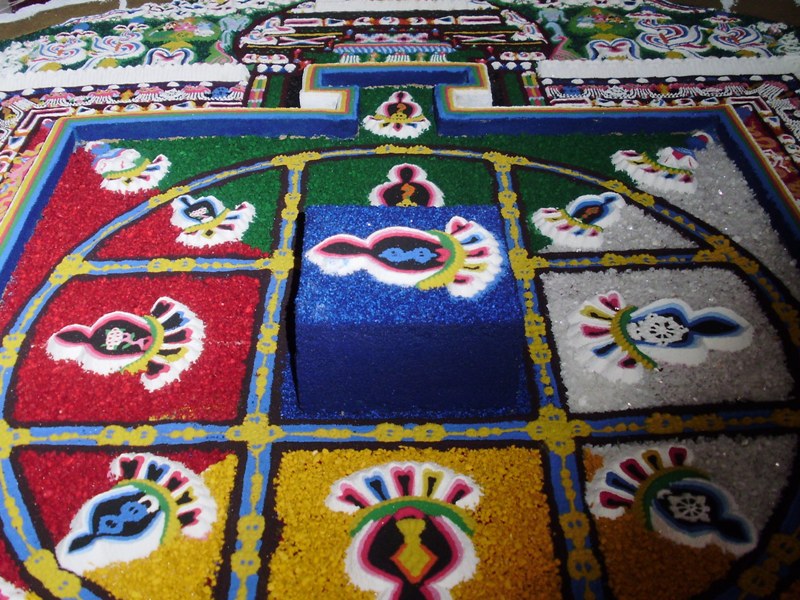 Why is sand mandala destroyed?

There is also the ceremony, when monks destoy a sand mandala. The deity syllables are removed in a specific order. The sand is collected in a jar which is then wrapped in silk and put to a river, where it is become part of nature again. This ceremony symbolizes the ephemerality of life and the world. 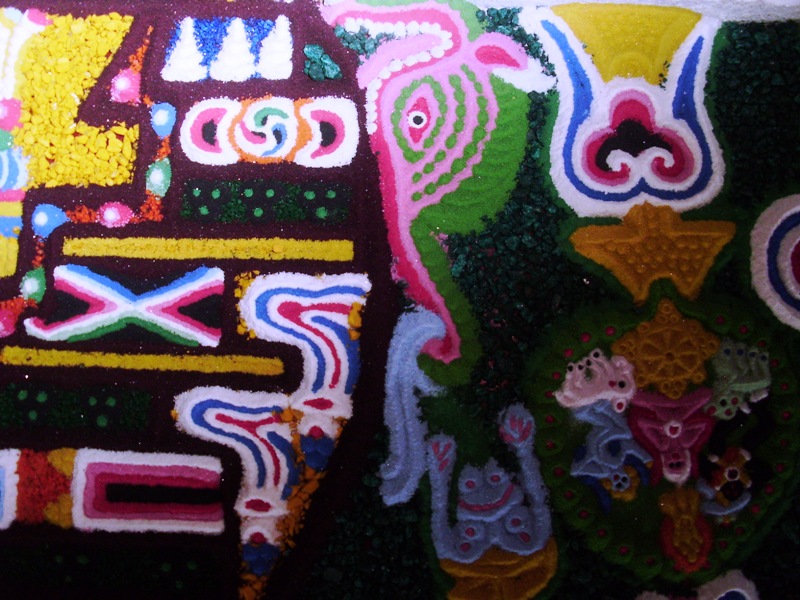