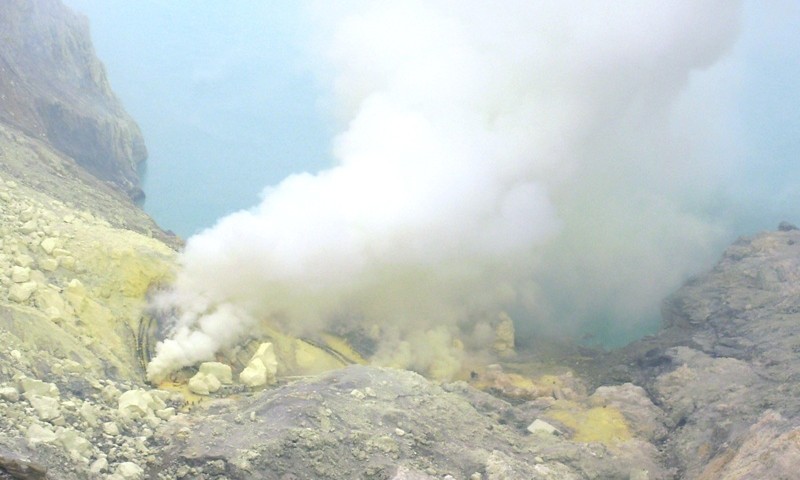 After leaving Bali we stayed in Banyuwangi – the town of black magic in East Java, Indonesia. We planned to climb a volcano Kawah Ijen (elevation 2368m). Sulfur from Ijen is unusual, because while it appears yellow during the day, at night it gives off an eerie blue light with flames that can reach up to five foot in height. Kawa Ijen is volcano where workers mine sulfur indeed under very difficult conditions.

We rented a car from our hotel in Banyuwangi. Driver drove us to the parking lot under volcano, where we started climbing. Difficult ascent of the volcano lasted about 3.5 hours . 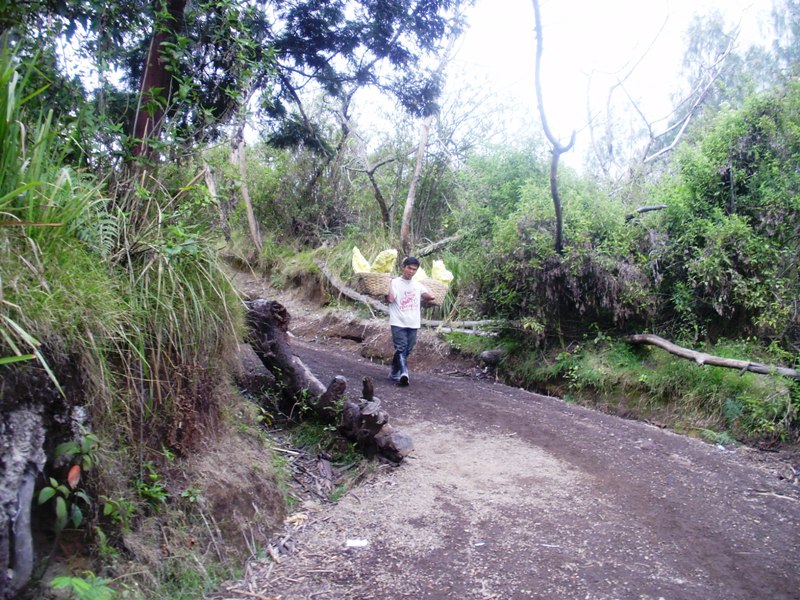 While we were climbing to the first stop in cafeteria we met slim sulfur carries. They carry sulfur from the crater on the shoulders in large baskets. Men are able to carry 60-90 kg, while they usually weigh less than the sulfur on their shoulders. First they have to climb with load 300 meters to the crater rim in the 45-60 degree decline and then 3 km down the steep and slippery trail. Per day are able to do it 2-4 times!! I really did not understand how they can handle it. I was not able to move the basket even a millimeter. The worst is that these workers are doing their job in really hazardous environments and usually have problems with the spine, eyes, lungs and skin. They don’t use any protective equipment. 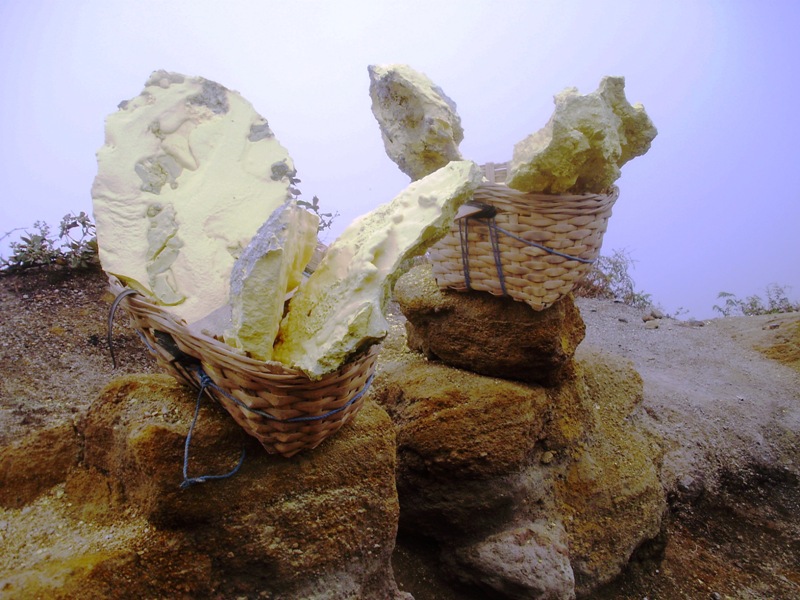 After about 3.5 hours ascent we reached the place where the sulfur is weighed. How much money they get depends on how many kilograms they carry, on average that means 50.000 to 75.000 rupees per day (3-5 Euros). Each carrier weights his basket and the data are recorded. When they bring sulfur into the valley they get money. At this point you can also buy souvenirs and support these workers. 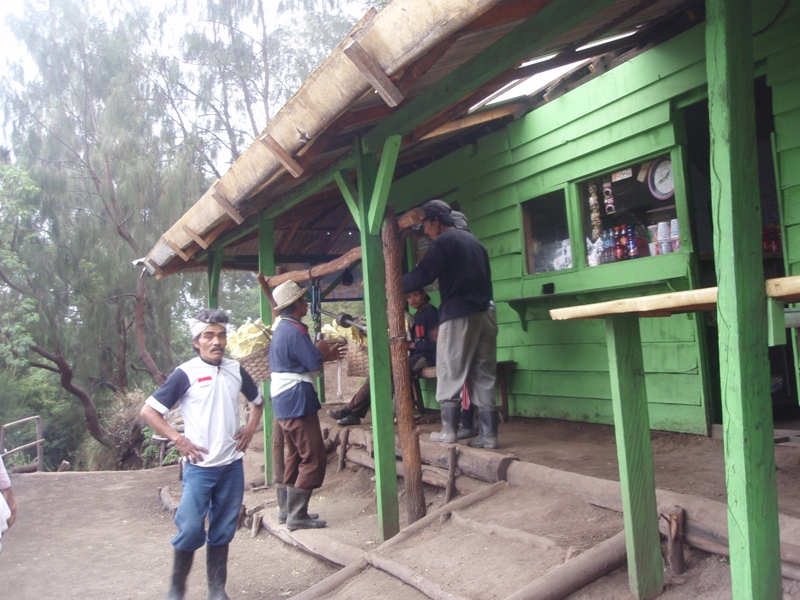 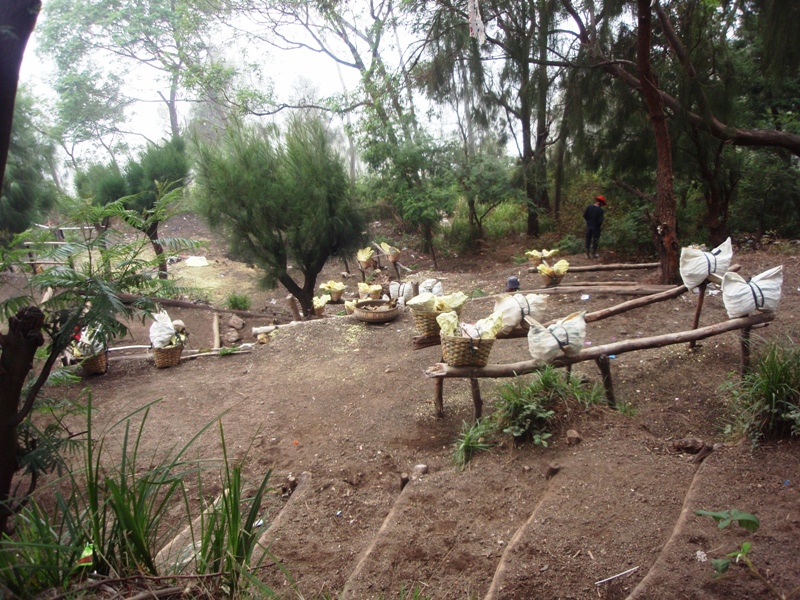 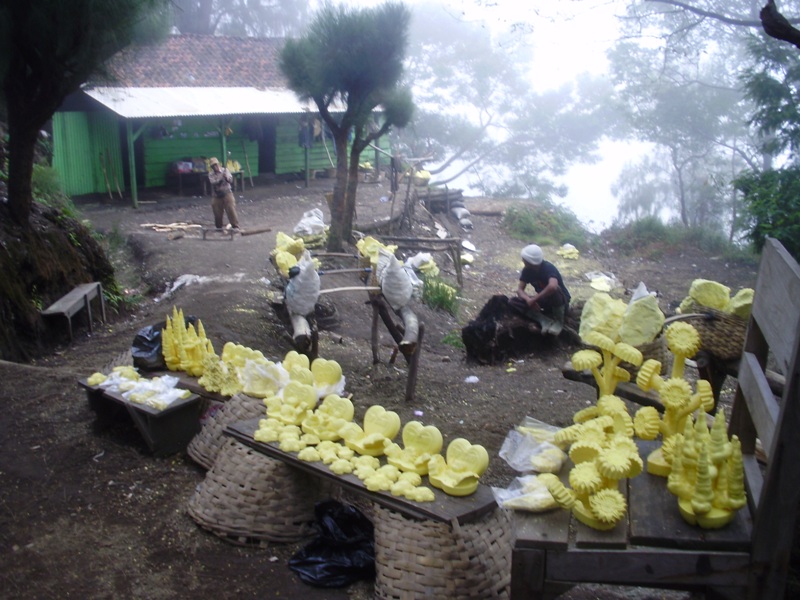 Then we continued climb to the rim of the volcano. On this trail problem with breathing has already begun because of sulfuric fumes. The country is turning into a lifeless landscape, as the volcano is still active and occasionally erupts. Eruptions burn all live under the crater. We climbed to the crater. We were here all alone, just with my Turkish friends. In this environment we needed to wear protective masks, because it is dangerous to breathe fumes. Below us was a crater lake with a spot near the lake for mining sulfur. 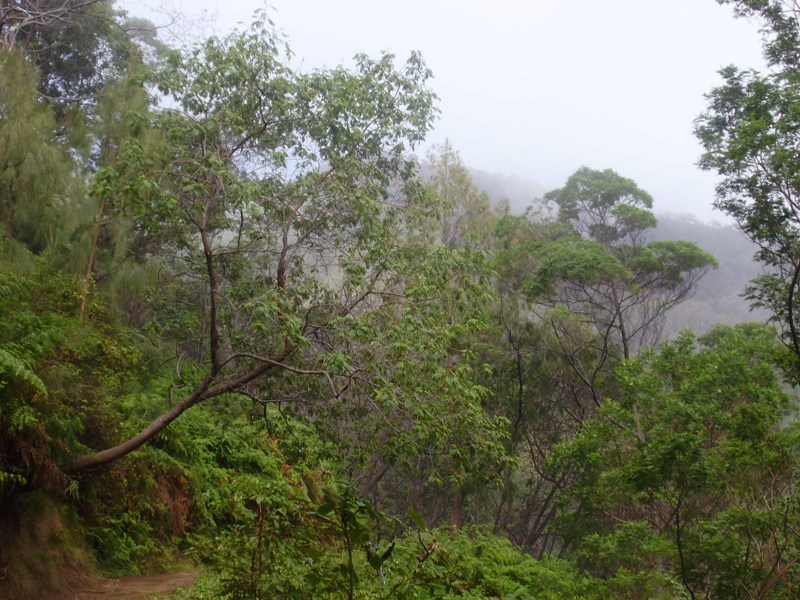 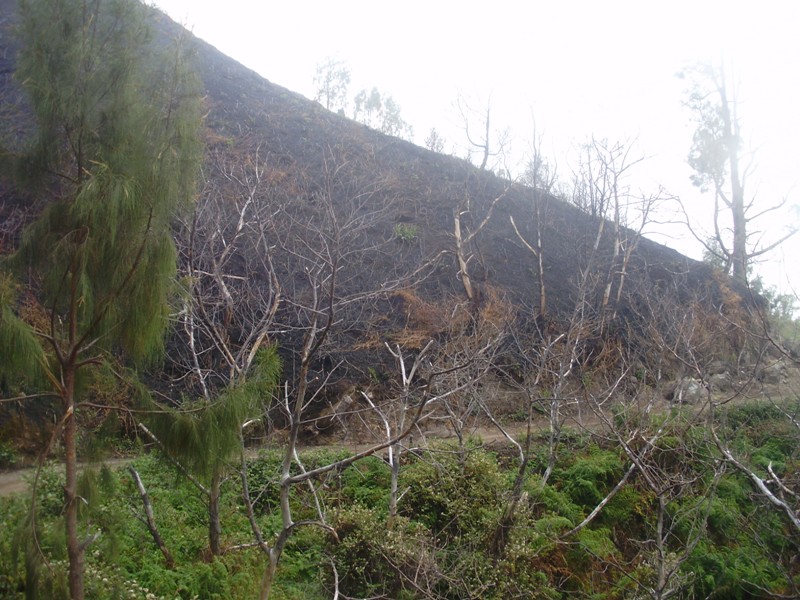 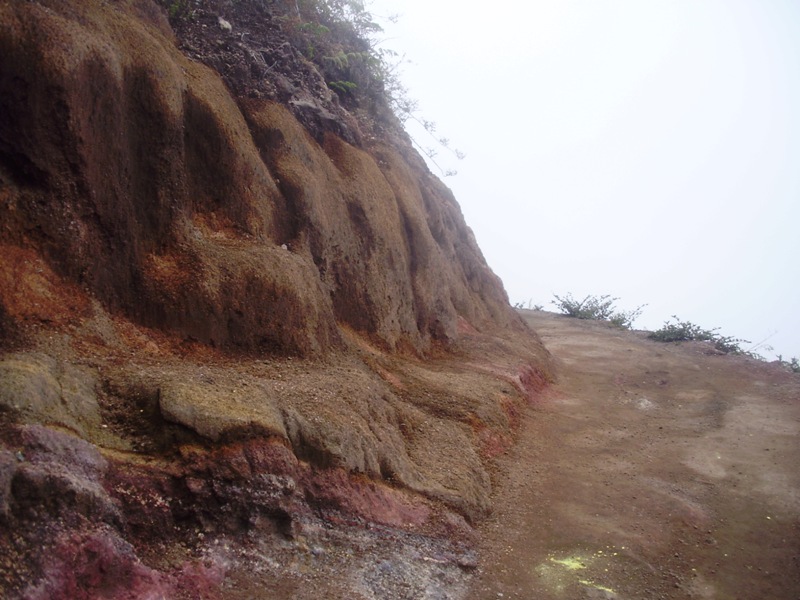 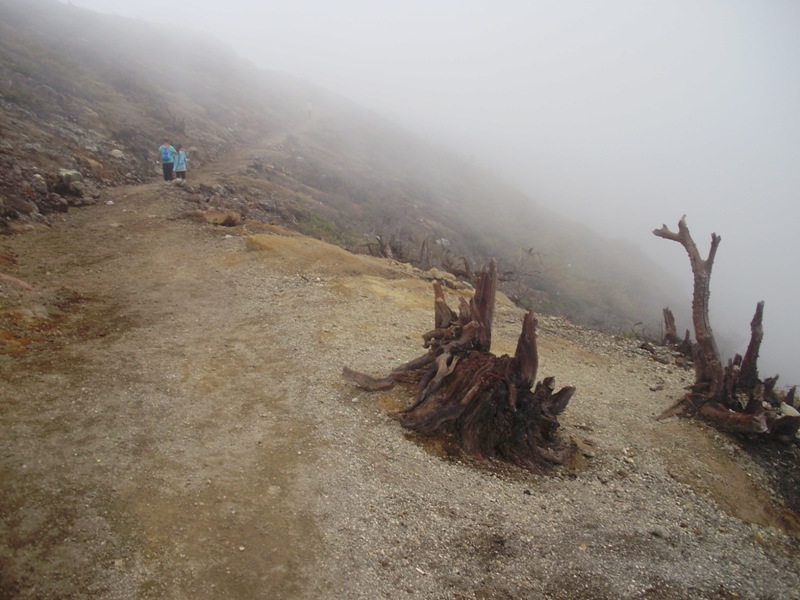 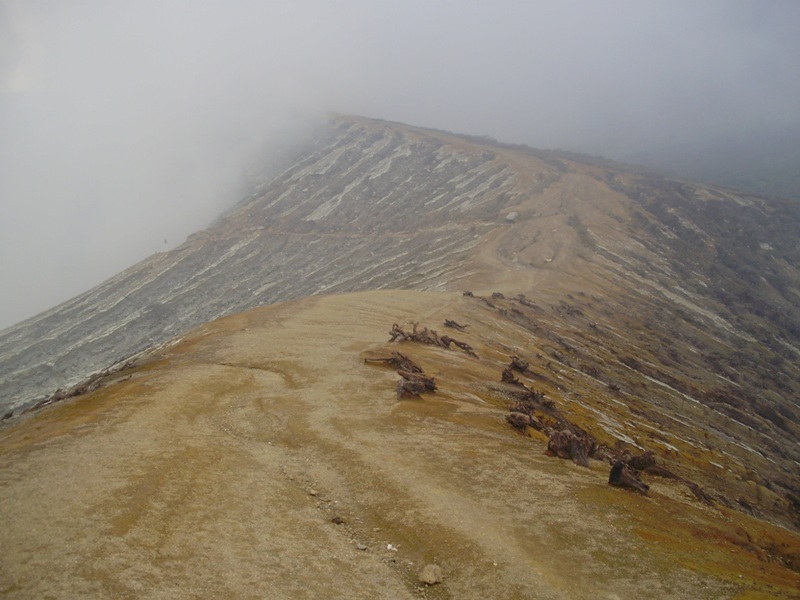 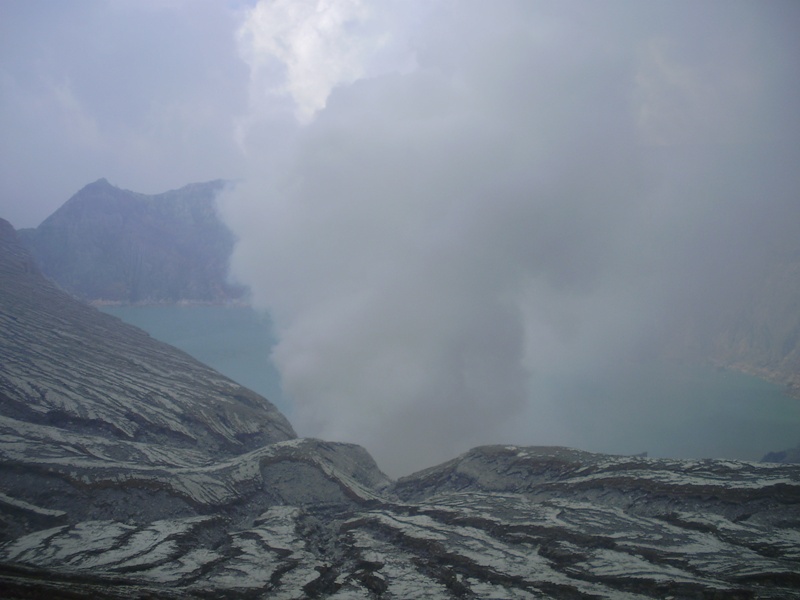 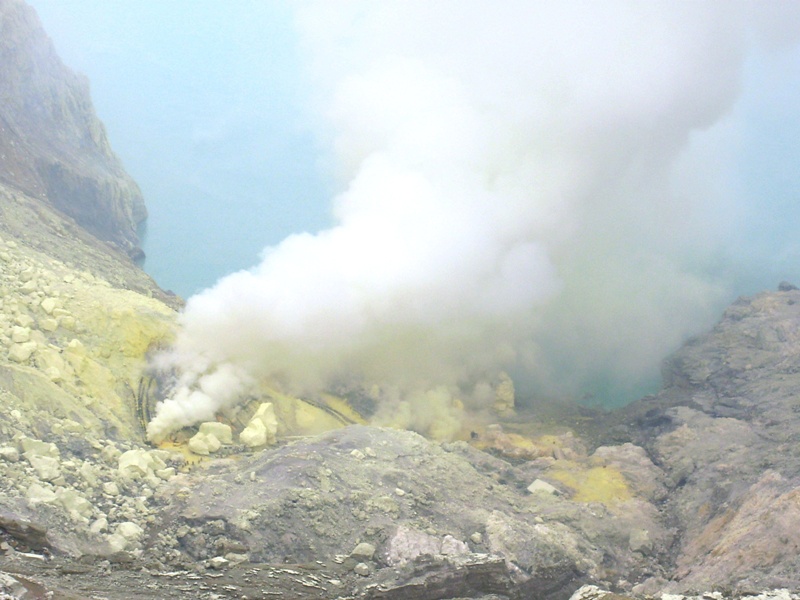 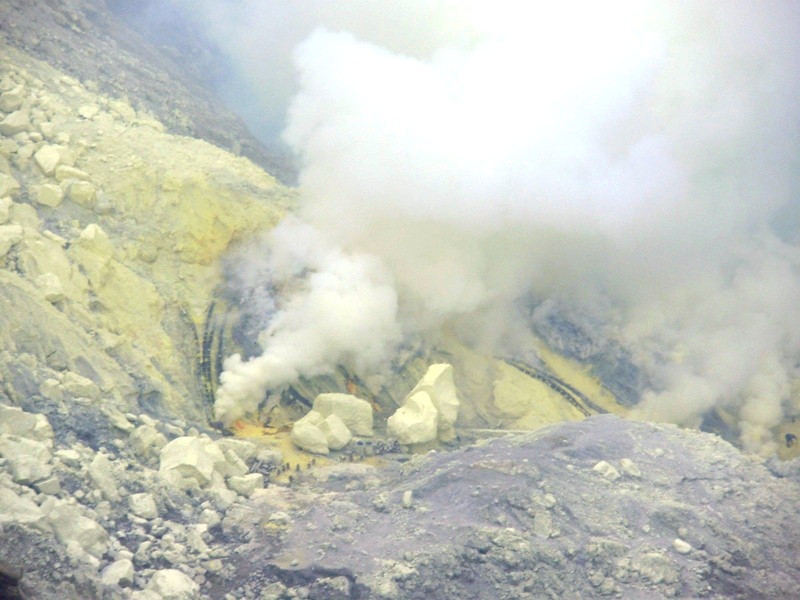 Kawah Ijen Lake is the most acidic lake in the world and this place is generally dangerous. If you arrive in the morning, when it is possible to come directly to the lake you have to be very careful. Some places are slippery and you may lose balance because of sulfuric fumes. At this point has already died several people who fell into the lake. 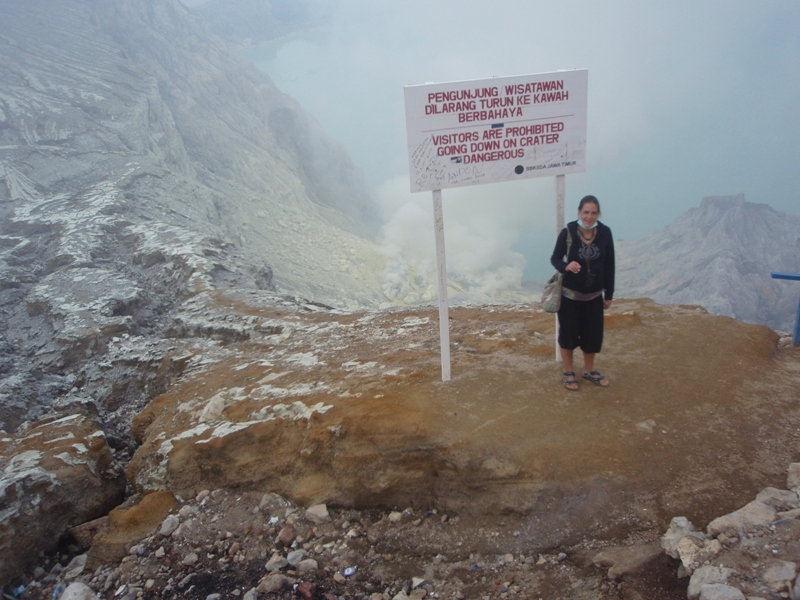 After some time, thick smoke twirled directly to us. It started to be difficult to breathe and our heads began to spin. One of the carriers who joined us immediately started running back. We understand that the situation is dangerous so we tried to get to safety as quickly as possible. We came into the cafeteria at the place where the sulfur is weighed. Carriers explained to us that during afternoon is dangerous to walk to the crater because the fumes rising, so you can become unconscious. In the cafeteria we stayed for about an hour and took a rest. While we were drinking tea we talked with carriers about their hard job.