Tana Toraja – Cult of the dead in Sulawesi 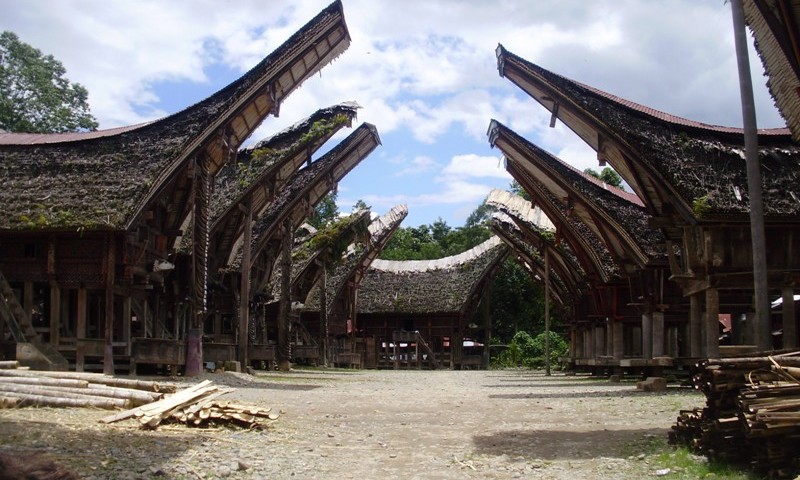 I wanted to visit land of Tana Toraja since I knew that this culture exists. And why I was so eager to get here? Because I like everything what is magical and unusual, that’s why Tana Toraja was the right place for me.

Tana Toraja is land in central Sulawesi in Indonesia and is known for its strange practices which the local people preserve for centuries. Even the arrival of Christianity didn’t destroy their culture and strange practices. Torajan people had strong roots and they retain almost all habits. As they explained me, officially they are Christians, but at heart Torajan.

I would like to introduce you essential points of Torajan culture. Tana Toraja is a region in the central part of Sulawesi high in the mountains. The main cultural and tourist center is Rantepao, although the local government seats in Makale. Whole Torajan culture is strongly linked to death. Torajan have very strange practices through which they honor dead relatives. Actually, their whole life revolves around these rituals of the death. 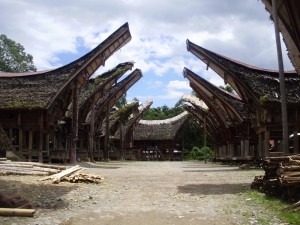 What will attract you when you come to the country for the first time are typical houses Tongkonan that are built in the shape of buffalo horns. This special architecture of the houses has special meaning. Each house consists of three parts – the southern part, middle part and northern part. Therefore, all houses in the land are built in the same direction.

The main philosophy is based on the fact that after the death there are two stages where dead people will continue. The first stage is called “Land of spirit” (which according to them is on the south of region) and the second stage called “Heaven” from where dead people can bless surviving family. In order to help dead family member to get to the “Heaven”, surviving family have to do a lot of work. They need to help the dead body on that posthumous journey. 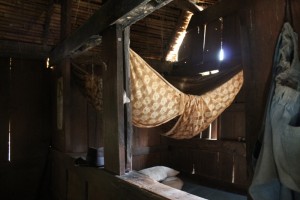 When a relative dies, the body is stored in a traditional house on the southern side, but the head is placed towards the west. If relatives turn the head to the south (Land of spirit), the body will be considered dead. But at this stage family member is still considered to be alive, but sick. They talk to him, carry food for him and so on.

Then local shaman arrives to the house and performs a special “magic” to the dead body. The body is wrapped in canvas. In the south room where the body is stored is put hollow bamboo stick towards the ground. When the body starts to decomposes, water from the dead body flows through this bamboo stick. When I asked whether it smells, they answered me not at all, and it is because of magic performed by the shaman. The most shocking fact is that these families have dead bodies in their homes stored for several years!!

What can help dead body to get to another stage is funeral. To be able to organize the funeral and thus soul can get into the “Land of spirit,” the family must accumulate enough water buffaloes and pigs to sacrifice them. Souls of those dead animals accompany dead family member the entire journey and help him to get to “Land of spirit”.

So the whole extended family must earn a lot of money in order to buy these animals that are really overpriced in Tana Toraja. Pig costs around 3 000 000 INR (200€) and the average water buffalo costs around 80 000 000 INR, which is 5,000 Euros!!! So not only Torajan but also extended family from other parts of Indonesia (sometimes from abroad) works hard and save money to buy these animals. 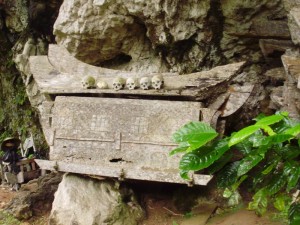 Tana Toraja funeral is based on the sacrifice of animals. After this ritual the body has enough souls of animals around that help him finally to get into the “Land of spirit”. Therefore, the head is turned to the south. From that moment the family member is considered dead. After few days family buries body into the tomb. In Tana Toraja, each family has a different tomb and there are several types – stone tombs, hanging tombs, tombs in the trees.

Sometimes you can see dolls that look like dead while living near the tombs. Local people called them Tao Tao. These dolls serve as a trophy, a sign that the funeral was a large (24 or more buffaloes). At a time when the family knows that dead family member will have a big funeral, they call a specialist for their production. The specialist finds a tree by his feeling around house, which is suitable for Tao Tao, cut it and counts the branches. How many branches he counts so many buffalo family must kill again. After this ritual of killing he can cut Tao Tao from a strain of the tree. 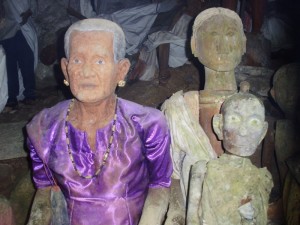 But the killing of buffalos in Tana Toraja is still not enough. The family meets at the tomb regularly every few years, what requires more animal victims. Also, dresses on Tao Tao dolls are changing every two years, which means death for another buffalos and pigs.

A time at which the dead body will finally reach “Heaven” from “Land of spirit” in company of all those souls of sacrificed animals  and thus bless the surviving family is unknown. One day it just happens. Incomprehensible, right?

And where did it all start? Torajan believe that their ancestors came from the heaven. They were very strong and had power. They came few thousand years ago on boats that resemble their traditional houses. They taught them how to build them and all these bizarre cult practices.