The day of killing – funeral ceremony in Tana Toraja 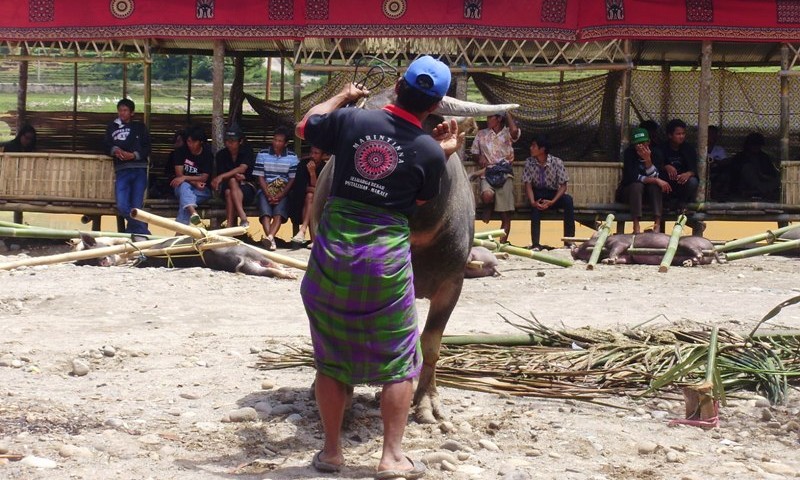 The next day we had a guide that took us to the funeral ceremony in Tana Toraja at which the animals are sacrificed. In Tana Toraja we mostly solve everything on our own, but to a participating funeral we needed a guide. Guides know about all the funerals that take place in the area. Funerals are often held at remote locations in which it would be difficult to get and we would probably have to seek place all day. You should read this article for better understanding of the culture of Tana Toraja and significance of funerals and animal sacrifice .

This day we had planned to visit a traditional funeral, local market and cockfighting. We left early in the morning. At that time we still didn’t know it will be up to such a massacre day full of suffering and killing.

We went about an hour and a half through the really bad roads by motorbikes. On some sections, I felt that I was on motocross. When we arrived, we parked our bikes around 300 meters from the scene. From the distance everything looked innocent so far. On ceremonial site began meeting of guests – friends and extended family members. Immediate family dressed in black went to sit down to a reserved area. Guests brought the sacrificial animals, in Tana Toraja – pigs and buffaloes. Buffaloes were collected in the middle of the arena to the sacrificial site and pigs were collected near the river. We started to be nervous with Maria. We knew what is going to happen. There was strange atmosphere in the air. On the one hand I wanted to take this ritual as a part of their culture, on the other hand I had resistance and would rather flee, but curiosity was stronger. 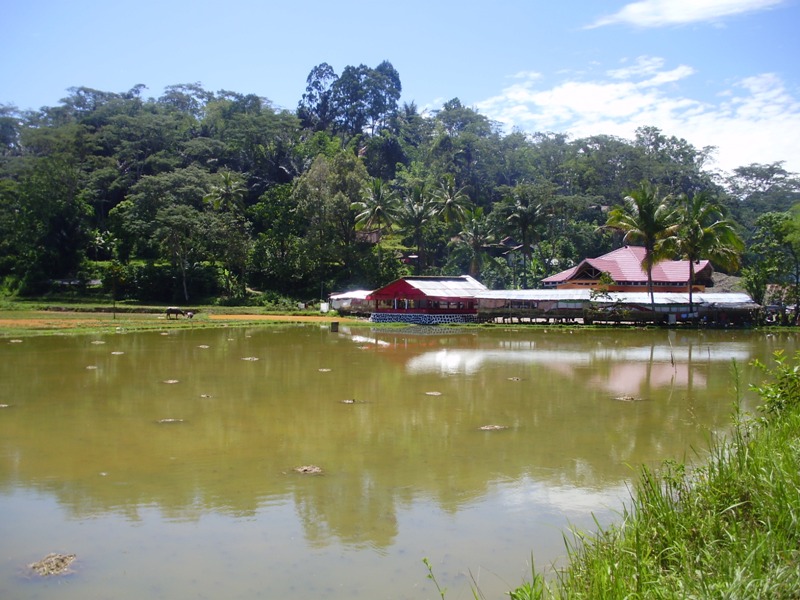 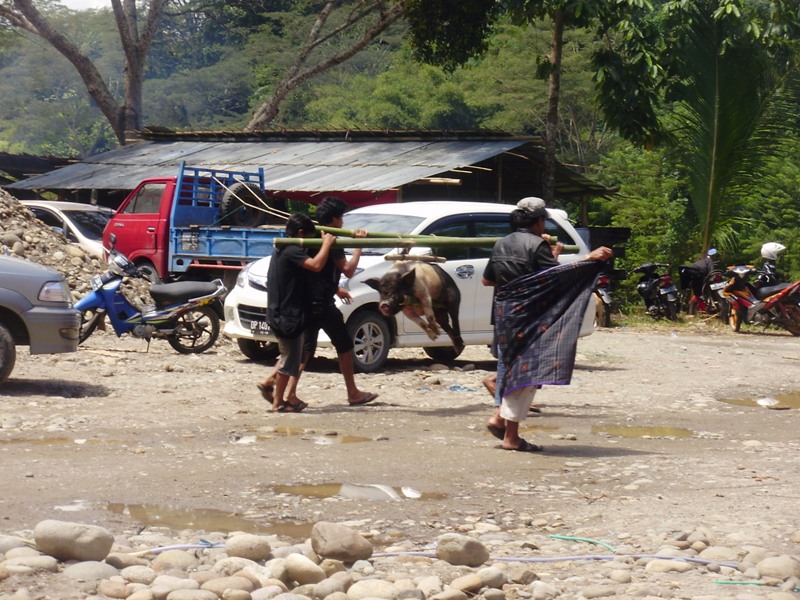 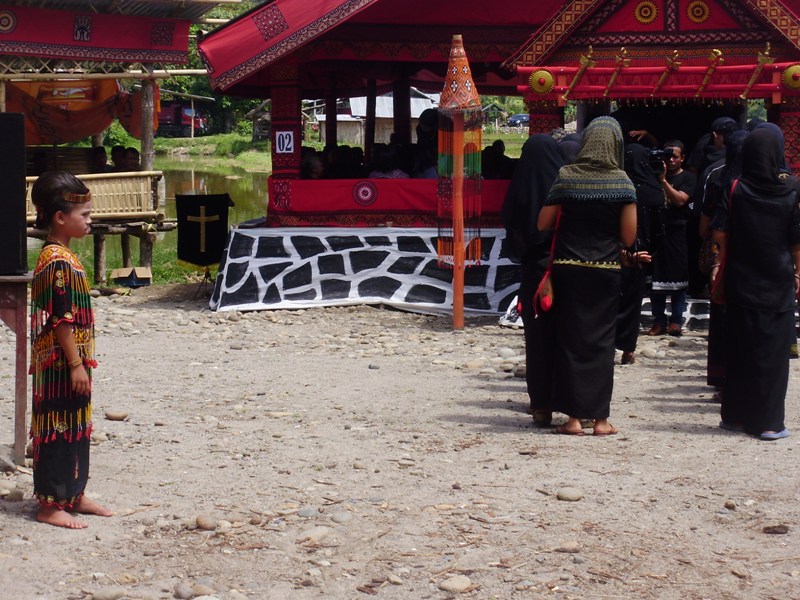 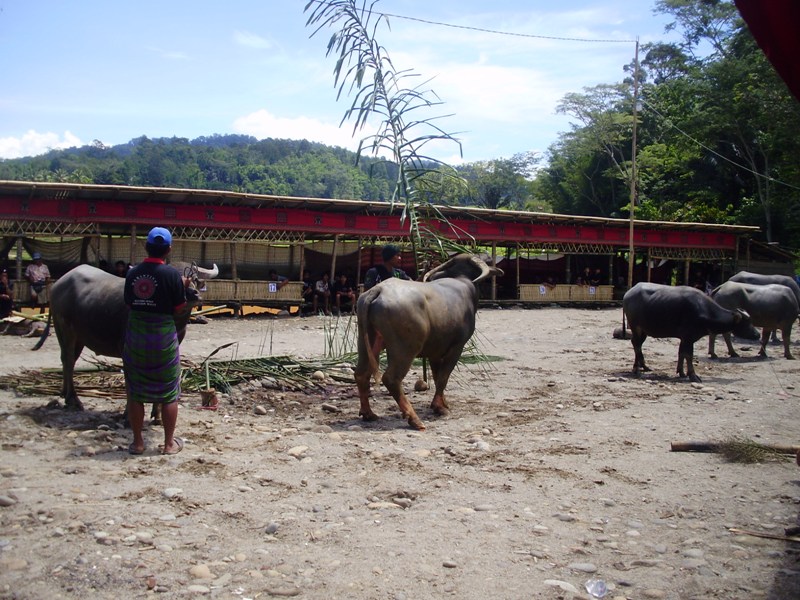 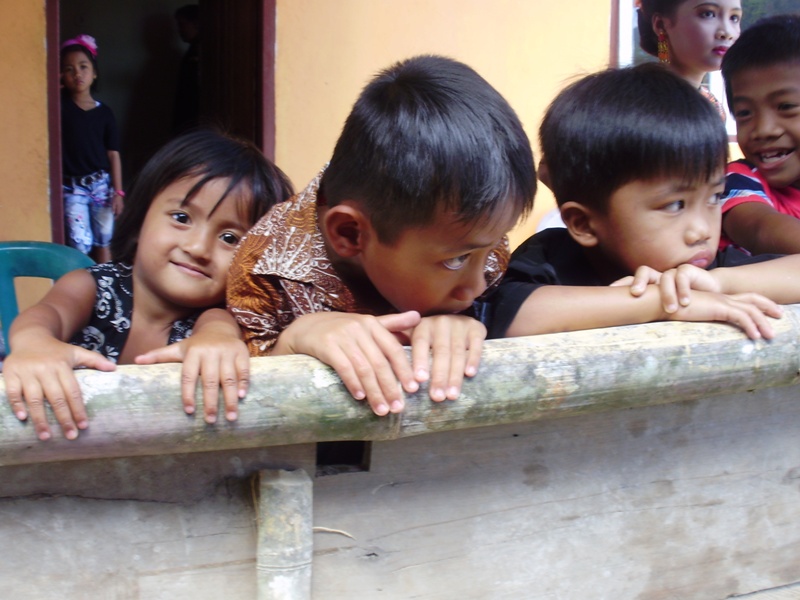 Buffaloes were prepared to sacrifice. We were able to see how much those animals feel what is going to happen. It all started with the slaughtering of the first buffalo. This is done quite easily and quickly, using a sharp knife that is sharpened at the buffalo horns. Man cut buffalo through the carotid artery. The animals immediately fall to the ground and bleed to death. Buffaloes were dying quite a long time on the ground , about half an hour. Then ceremony continued with the slaughtering of other buffaloes. The final look was terrible. Everywhere was a lot of blood, buffaloes lying on the ground, some of them were already dead and some were shaking in spasms of death. 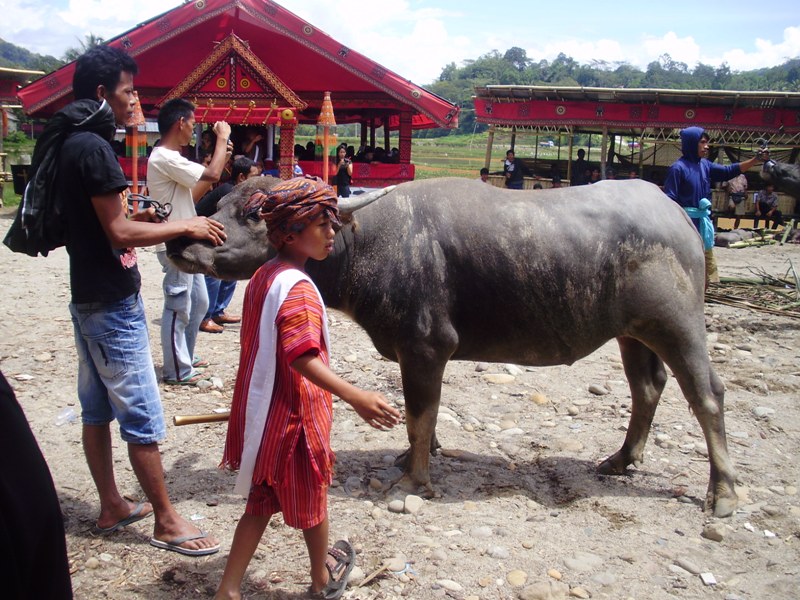 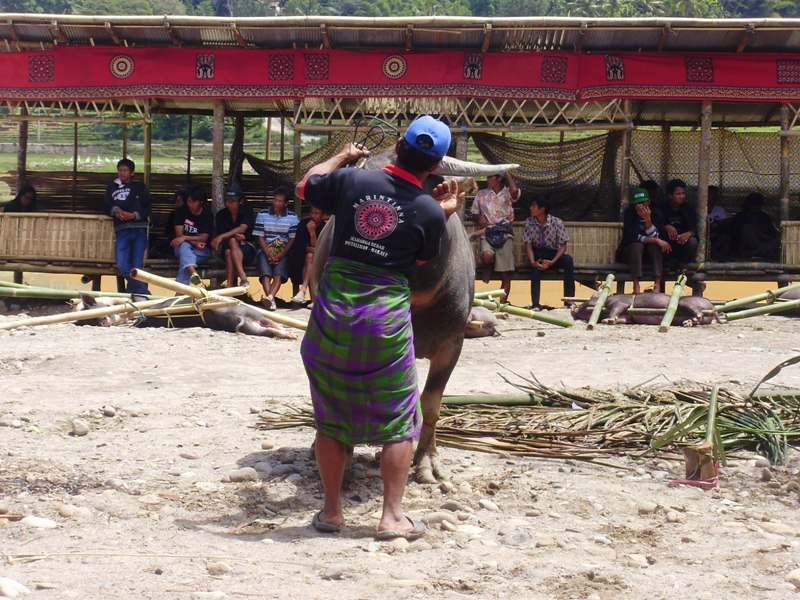 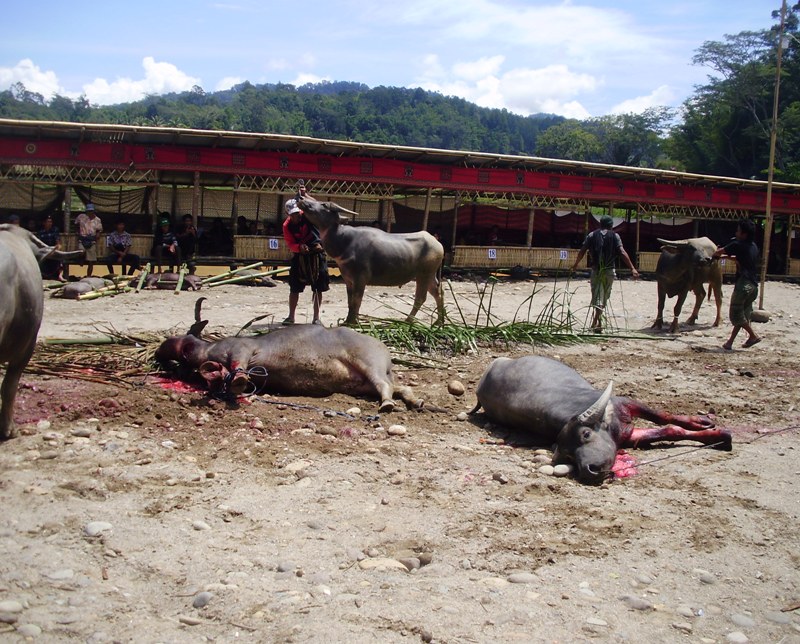 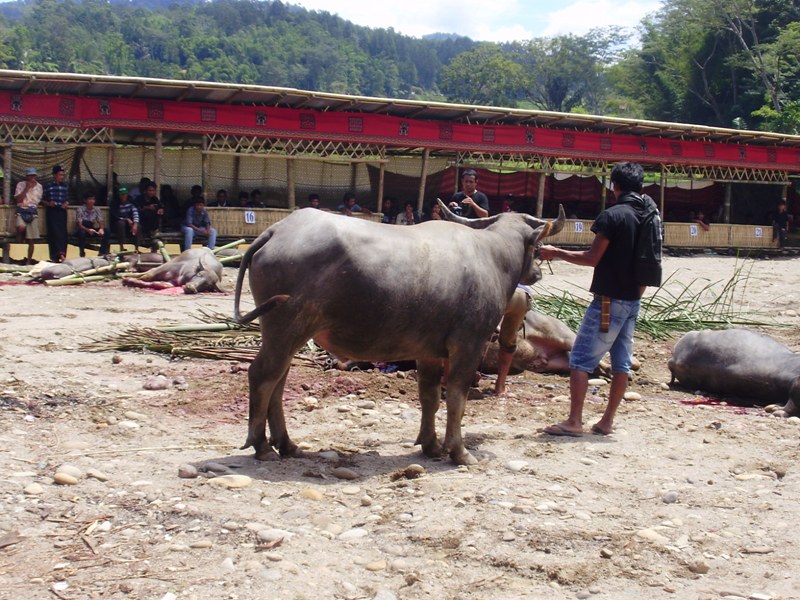 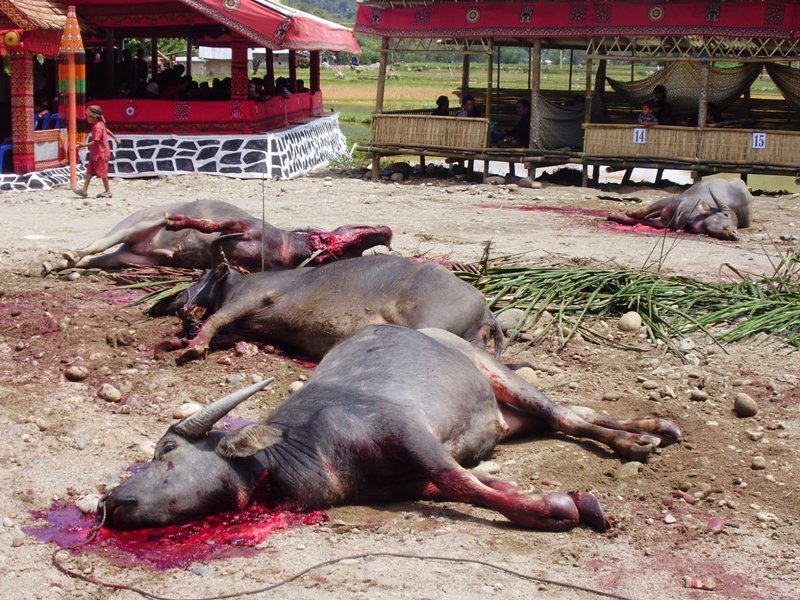 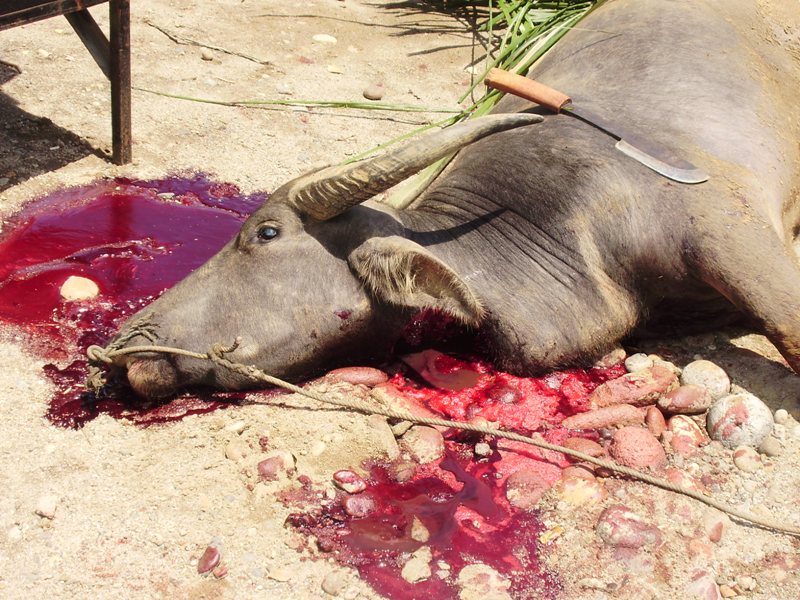 I suddenly realized that I was standing motionless with open mouth, my heart was beating like just before heart attack, my whole body was shaking and I was nauseous. I began to ask myself how I could watch this. It was because of adrenaline in the blood. I looked at Maria. She looked exactly like me.

We saw dog that started running around the corpses of buffalo. We both noticed that he enjoys it. The dog seemed to be really aware that he is not part of this killing ritual and can run around wherever he wants. Then he began to drink the blood of buffaloes.

When the executioners were sure that the animals are dead, they started cutting the meat. They first built shelter of large leaves. They served the meat in the shade. Individual parts of the meat are then handed out to family members and friends according to precise rules. Immediate family gets buffalo horns. Later they will place horns in traditional houses as a trophy. 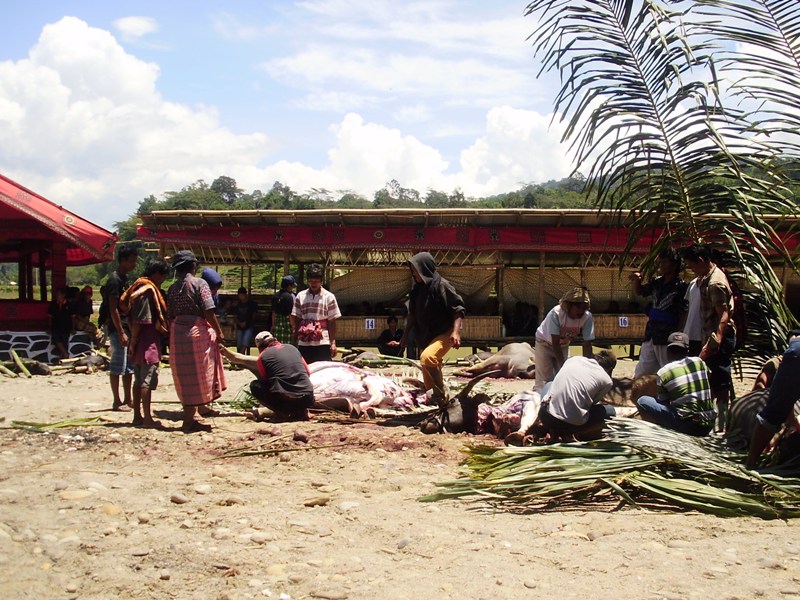 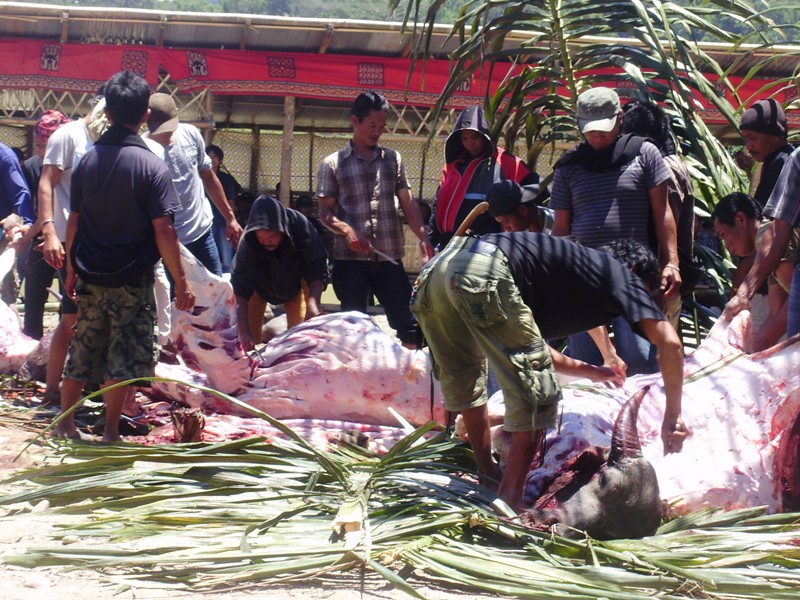 The family in black gradually moved to a place where pigs were collected at sacrifice. We walked along them. While I was standing in the sun, family members began inviting me to come closer to them to the shade.  I guess these people have never seen a person with white skin, because most women admired and caught my skin on the hands. Previously, we were not sure whether the family would agree that we attend funeral, but they were very nice to us. 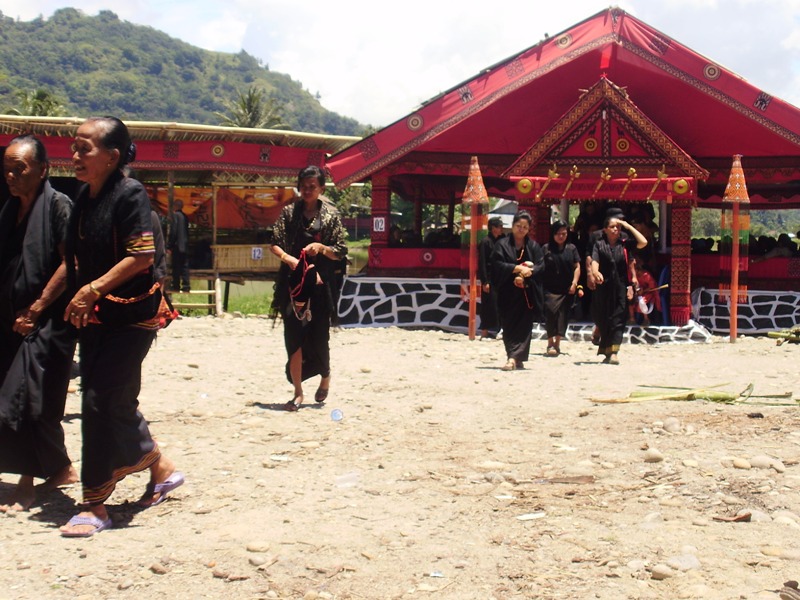 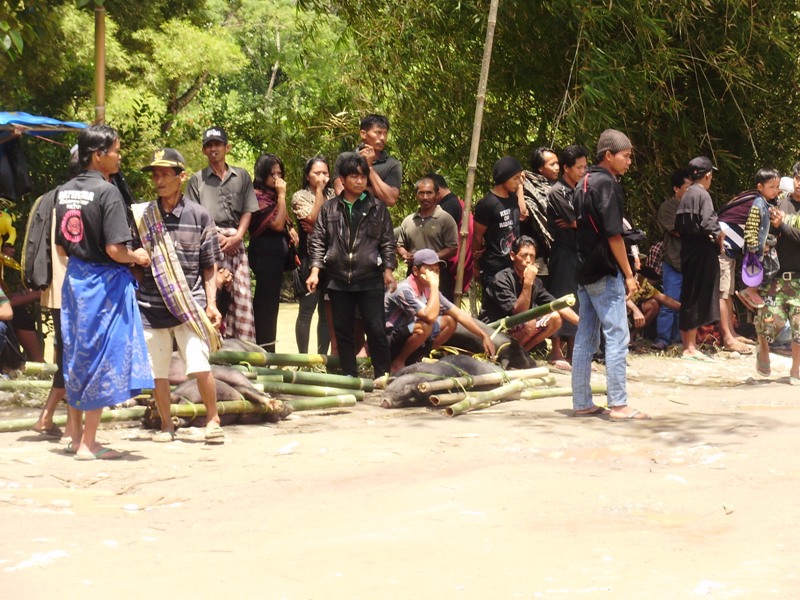 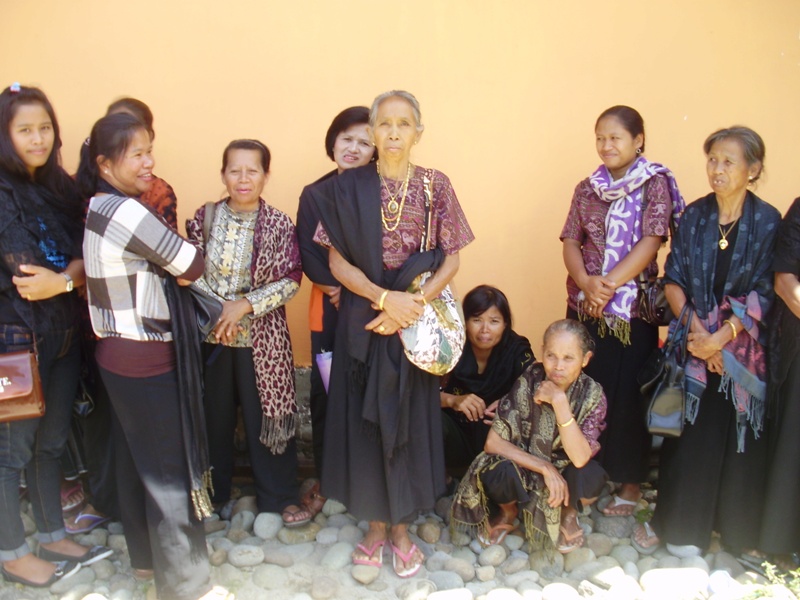 We were determined and we came near the river, where people killed and sliced pigs. I was able to watch that just a moment. And when we saw a pig’s eyes and heard such a horrible sound when they were dying, we said it was enough for us to see. We found our guide, thanked the family and slowly left the place. 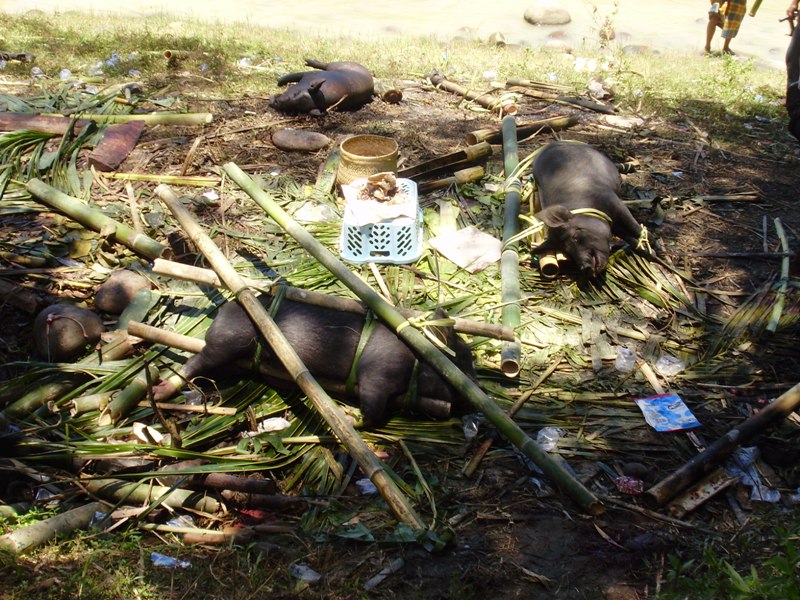 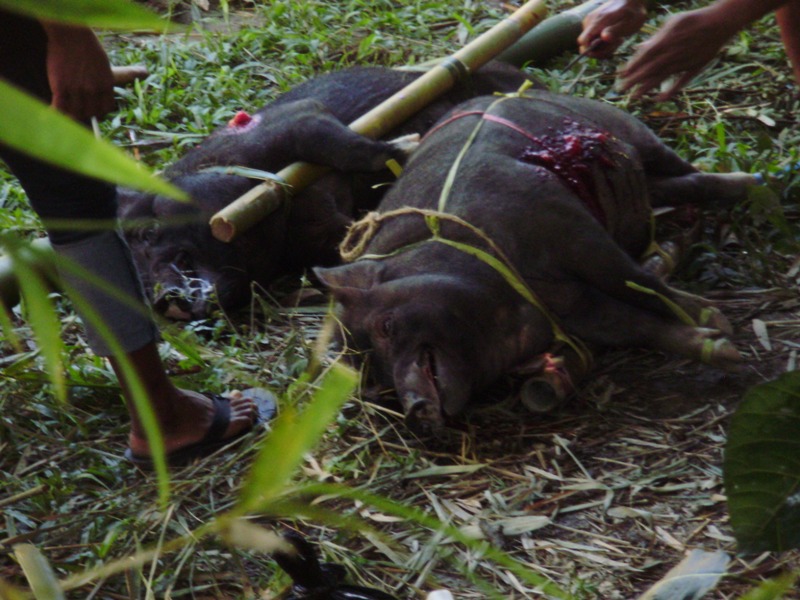 We saw live the funeral ceremony of sacrificing animals for which the family is waiting for several years to collect enough animals. In our culture we can call it as animal massacre, but for them this means that from now the souls of buffaloes and pigs begin to accompany the dead member of family into the Land of spirit.

Then the guide took us to the village to see the traditional market that takes place here once a week. We started to think we are finally in peaceful place until we have not reached the part where pigs were sold for ritual purposes. Hundreds of poor animals are tethered motionless and without water all day. 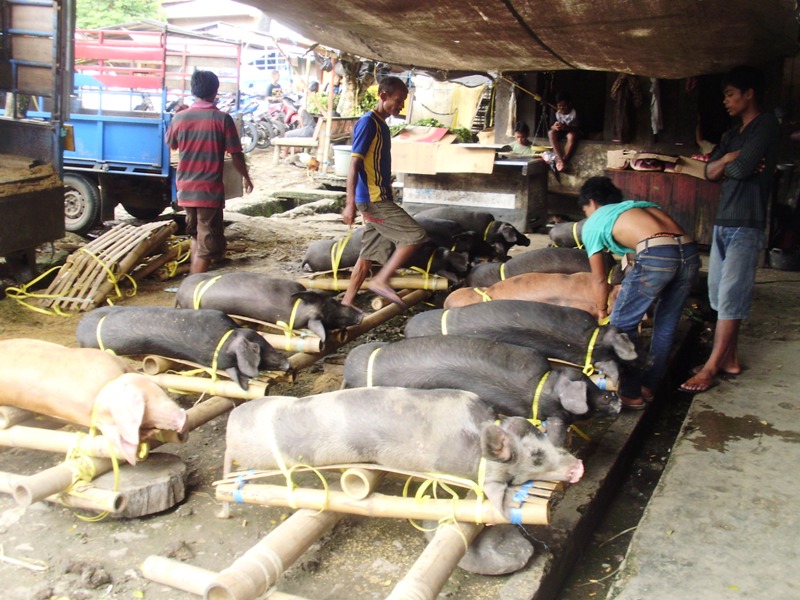 The last stop of the day was cockfighting, which is very popular in Toraja. The terraces were full of men who were betting big money. Each country has different rules of cockfighting. In Tana Toraja is allowed to use knives that are attached to the legs of cocks. So the loser cock is one that escapes from the ring or dies stabbed with knife. We tried to pass through the crowd in order to see fights. 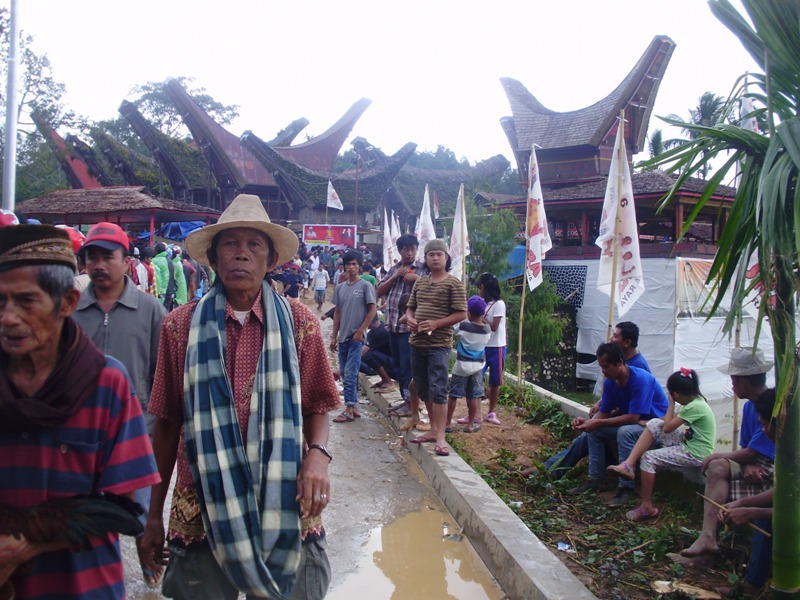 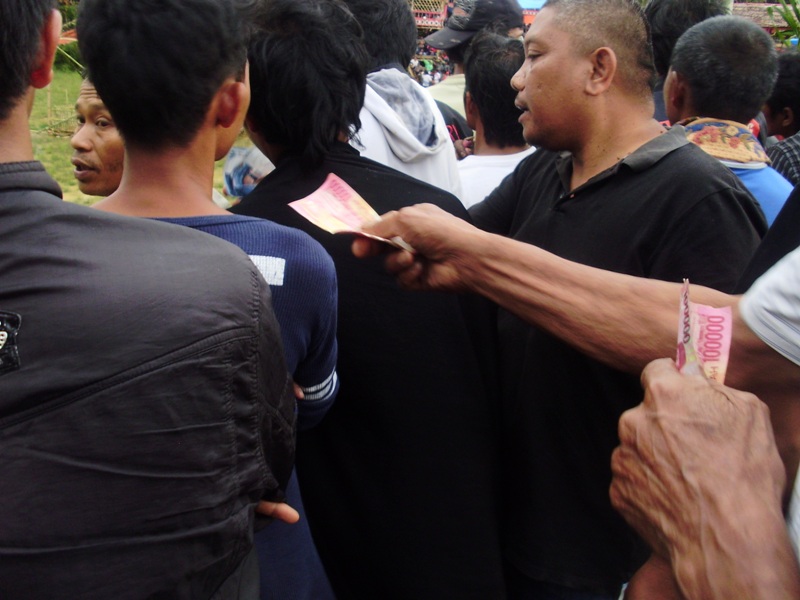 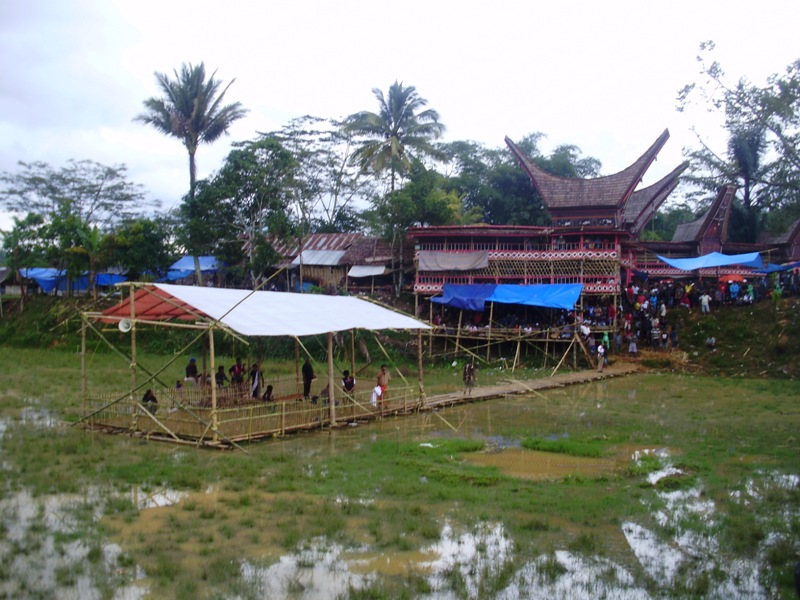 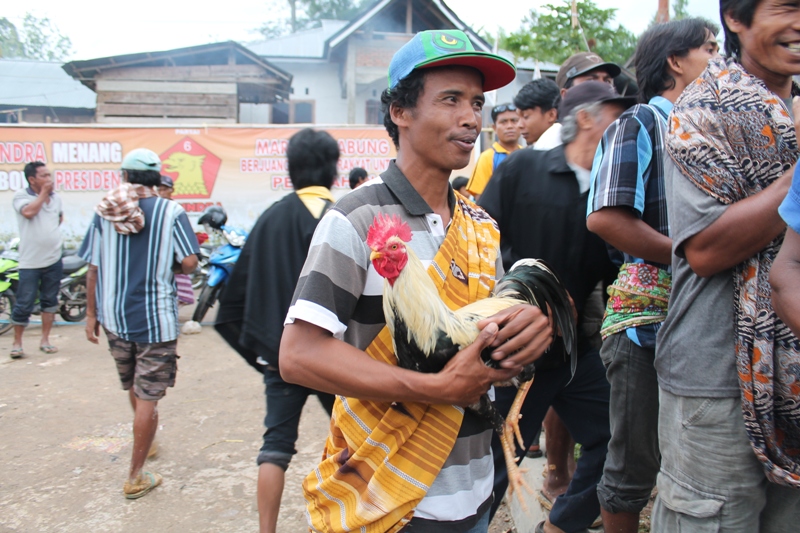 We watched for about an hour, and then heavy clouds were approaching, so we ran to take our motorbikes. it was heavy rain all the way back while we were riding to our guest house. Fortunately, there was an asphalt road all the time.

When we came to our guest house, we were silent and thought about everything what we saw that day. I had very mixed feelings. I always tried to avoid suffering to an animal, so this experience was really strong for me. When I started to fall asleep I saw terrible sight – eyes of dying animals.