The next day we went to visit the second attraction of Amritsar: Wagah, India Pakistan border crossing ceremony also known as the lowering of the flags or closing ceremony.

There was heavy monsoon rain before we left Amritsar to the border crossing. The whole town was flooded with dirty water in which garbage and animal and human excrements floated. It took about an hour until the water receded. I bought sandals in New Delhi few days ago, which caused bloody bruises on my feet. I put my left foot out of the rickshaw while we were driving. Suddenly our rickshaw passed through the pit, titled to left side and my leg with the open wound ended in disgustingly dirty water. A few days later, this innocent incident had unpleasant consequences. 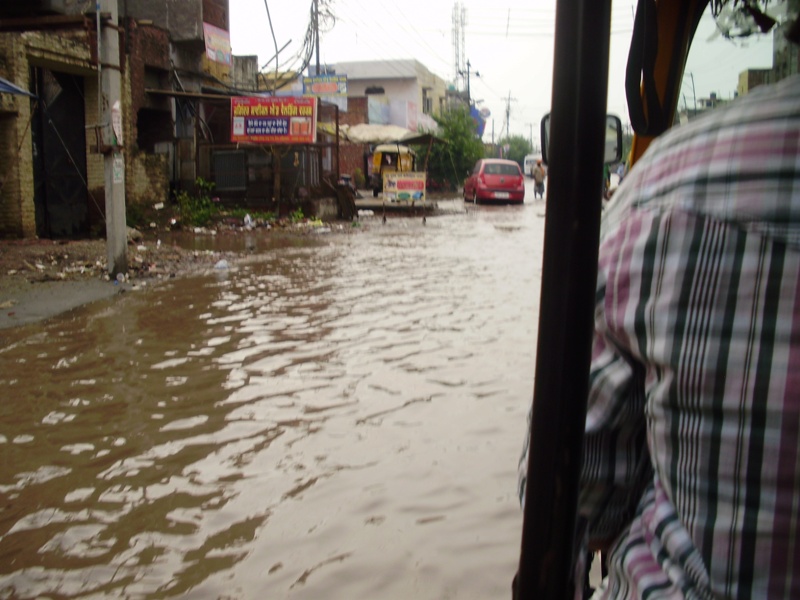 Not far from the Pakistan border we passed the first checkpoint. On the left side was visible last Indian village. We arrived at the border crossing. Rickshaw driver showed us the place where we all had to go. We had to leave all our pesonal items in the room, which looked like a dressing room. We could take with us only a passport, water and camera. 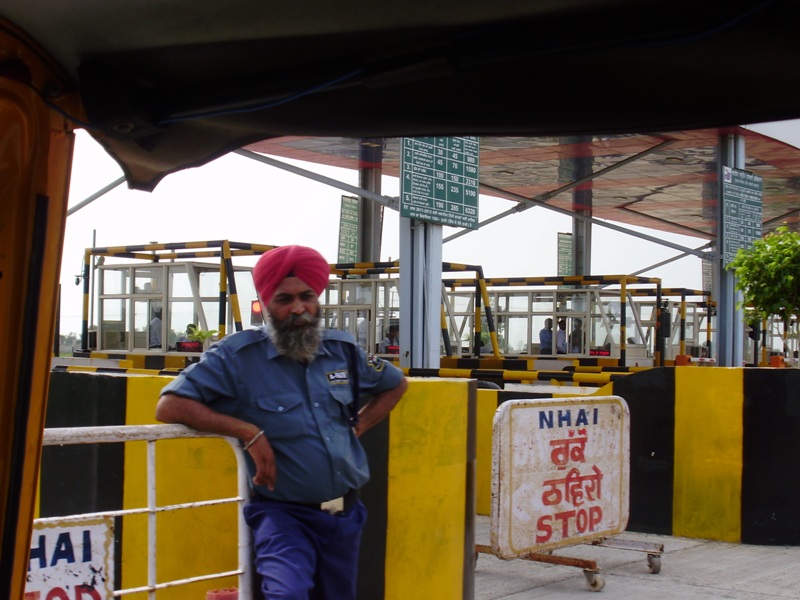 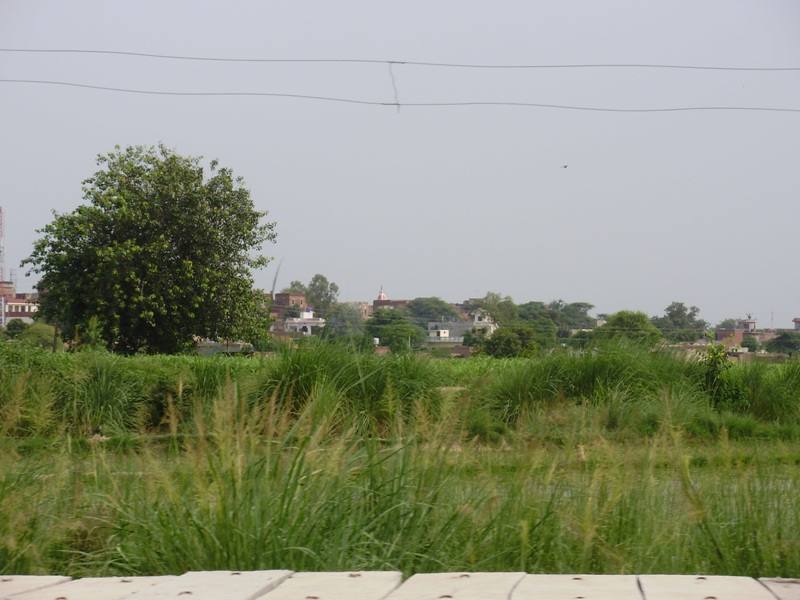 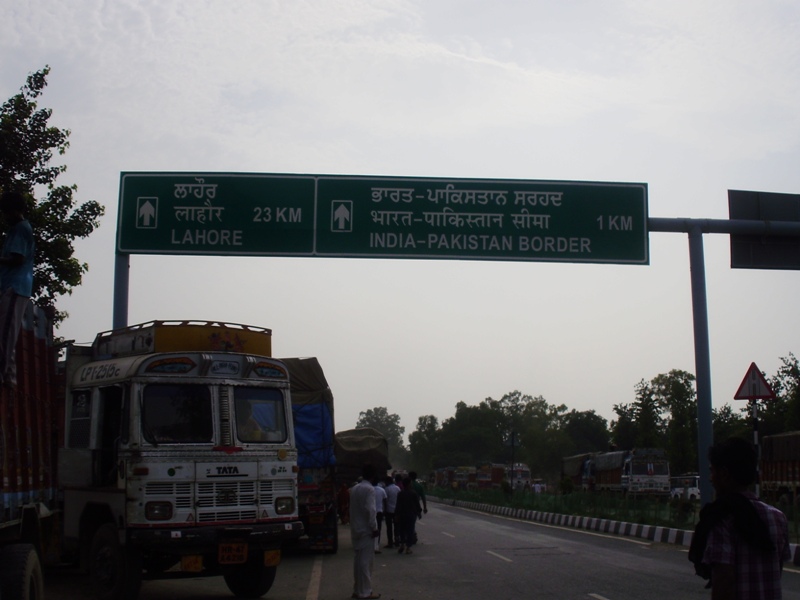 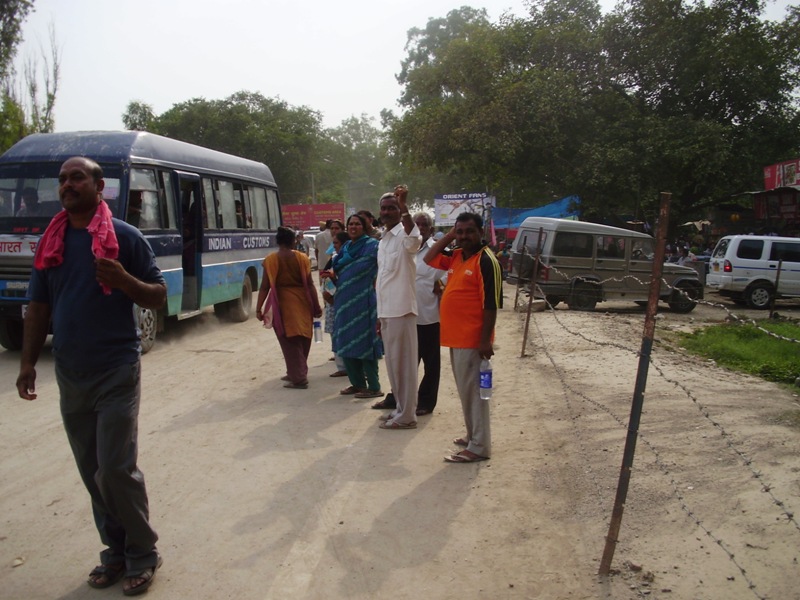 Then we were divided into two groups – men and women with childrens. So I was with my Spanish friend Olga and 3 Spanish boys were in other group.We had to stand in rows. Policemen rode horses and tried to alignthe rows. 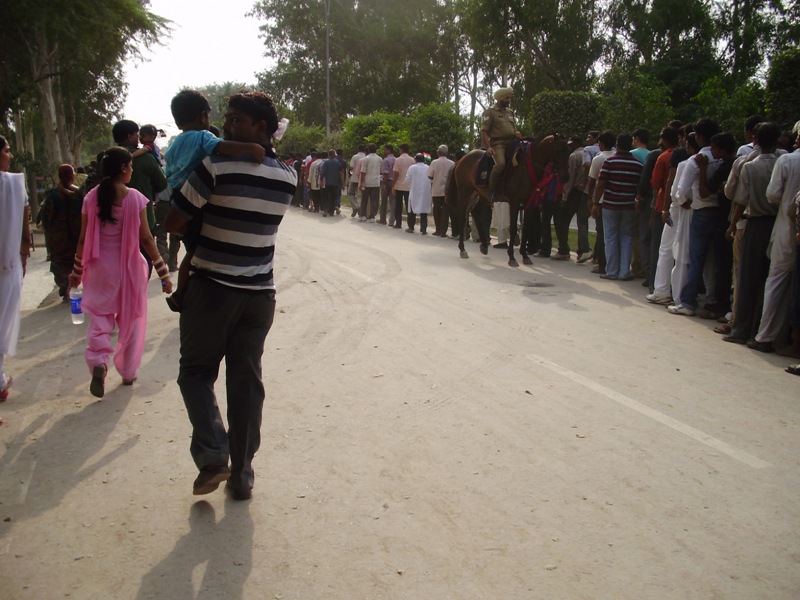 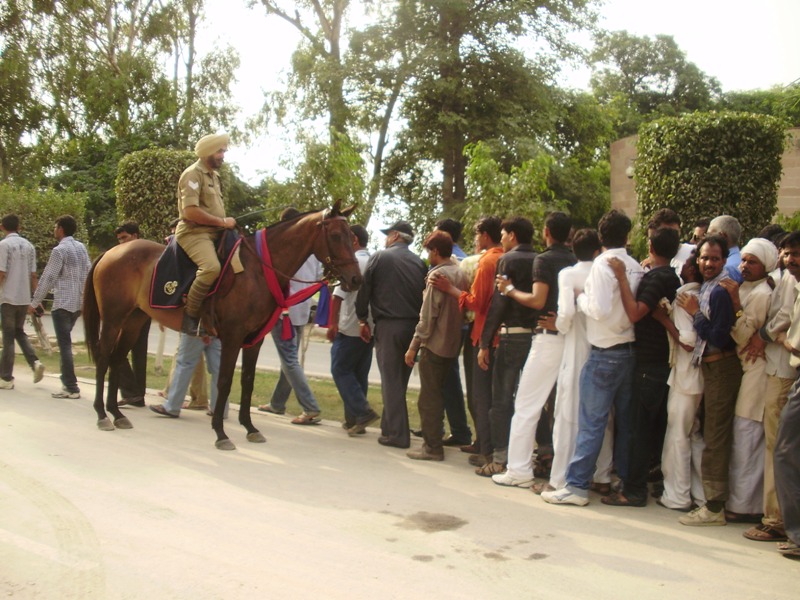 We passed through the booths, where we were thoroughly ransacked, if we didn’t take with us anything apart from the aforementioned things. 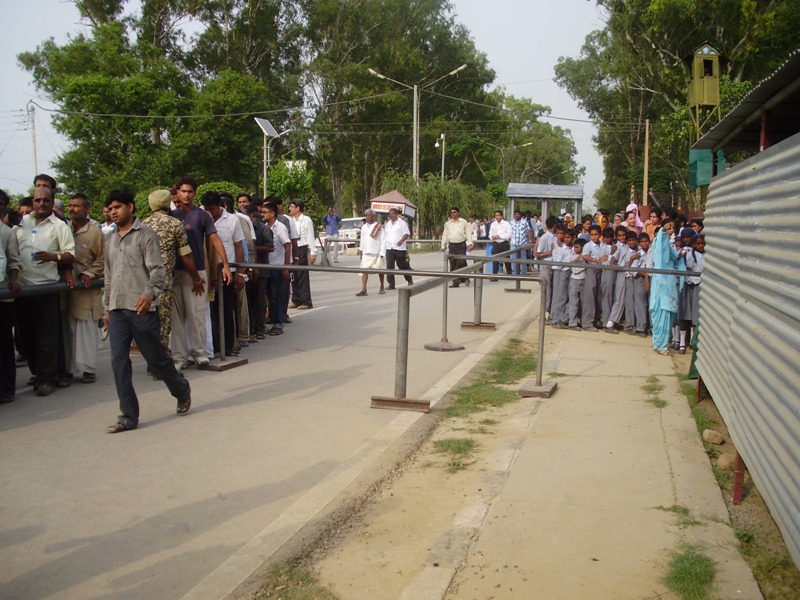 At the end they divided us into tribunes. We were in the department for foreign tourists. After a while the boys joined us so we were together again and we laughed at the whole process. Anyway, we had the best tribune. There weren’t many people and we had a good view of the entire ceremony and the Indian and Pakistani border. 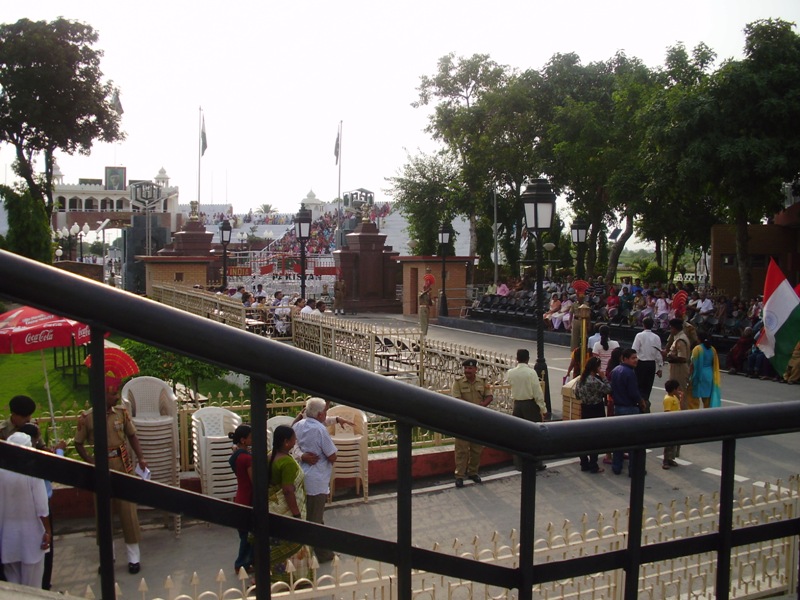 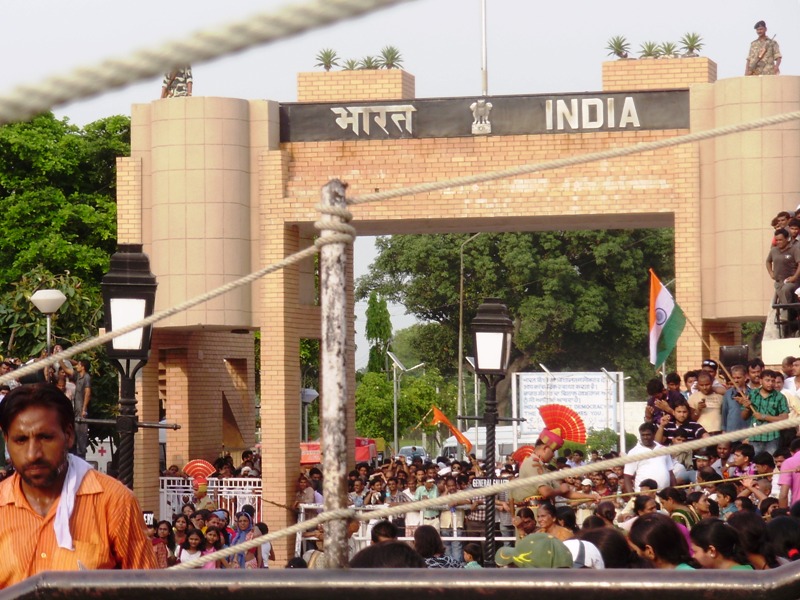 While people were sitting on the tribunes, national music of country played on each side of the border. Indians, especially Indian women wore Indian flag and ran with them. Literally they competed who will wear flags and run with them. This moment we already didn’t understand what is going around us. 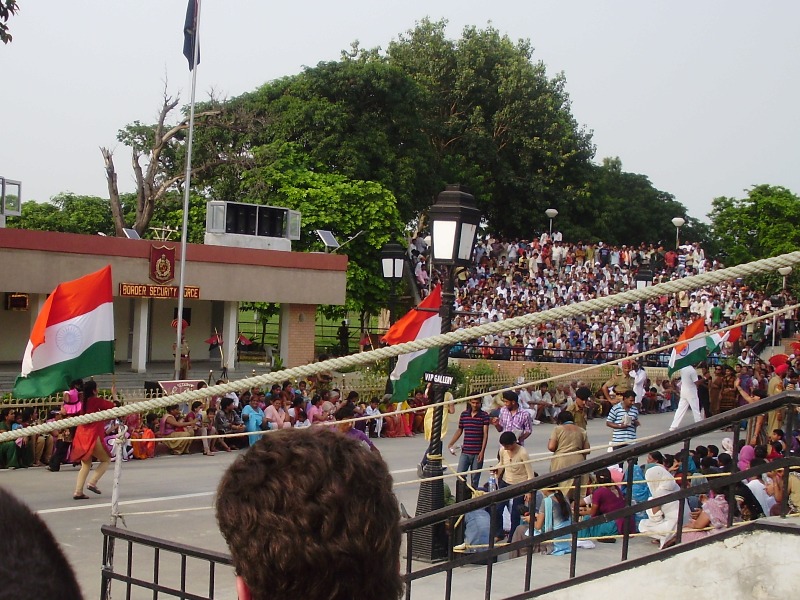 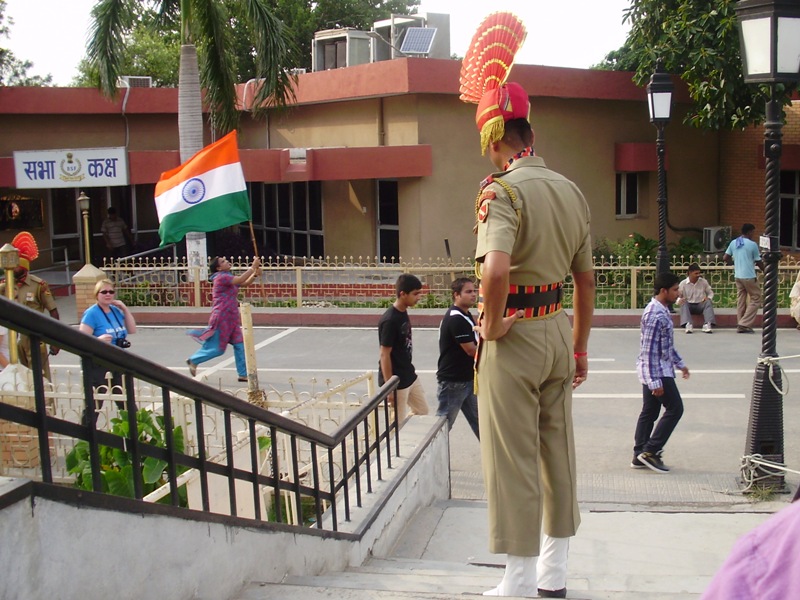 Then something what looked like a disco started on the Indian site. Women gathered down and began to dance. I got the feeling that Indian women show to Pakistani women that they are allowed to have fun while Pakistanis obediently sitting on tribunes, because they have this kind of fun prohibited. 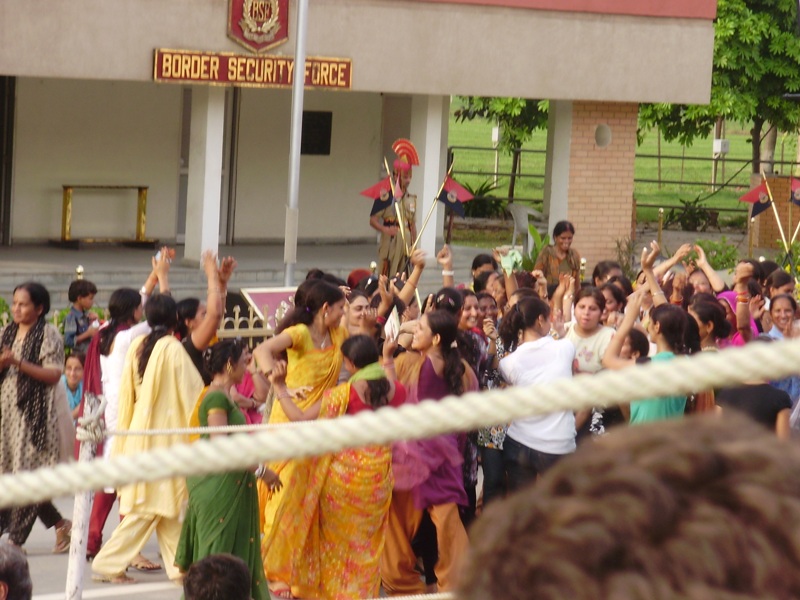 Then the performance itself began. It was crazy. The ceremony is that the soldiers are marching up and down on each side, rising high foot, shouting chants. People in the tribunes encourage their countries as in a football match. From our site of the border Word Hindustan Zindabad echoed and Pakistan Zindabad from the other site. People stood up from the seats, lift their hands and screamed. The iron gates at the border were opened and the two flags were lowered simultaneously. 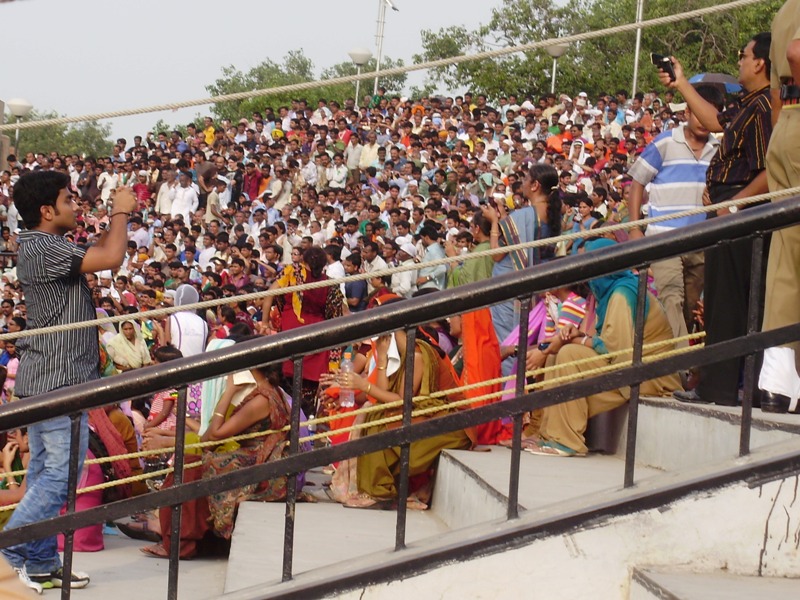 The flags folded and the ceremony ended with handshake between soldiers from each side. Then the gates were closed again. In this crazy border crossing you can see how much Indians and Pakistanis are proud of their country. 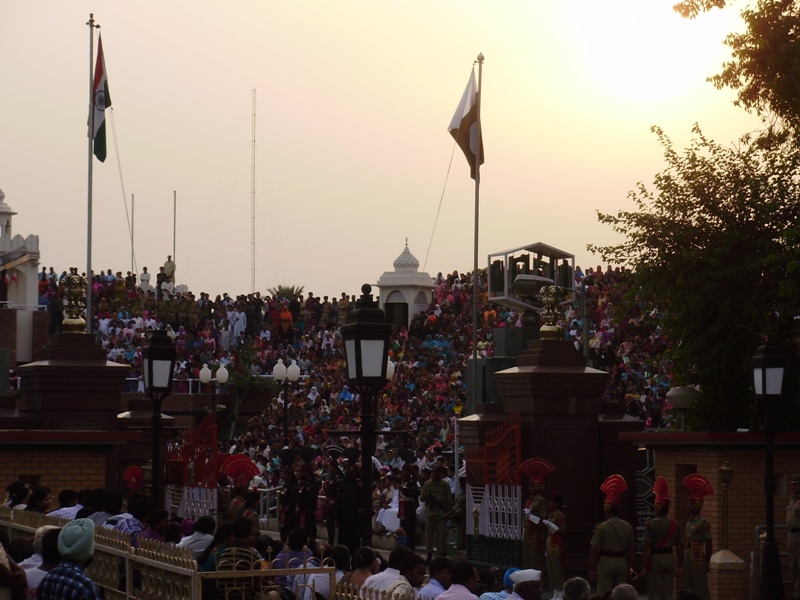 When the performance was over, some people each side gathered downstairs and began screaming to the people from opposite side. Among them were soldiers who controlled the whole situation. 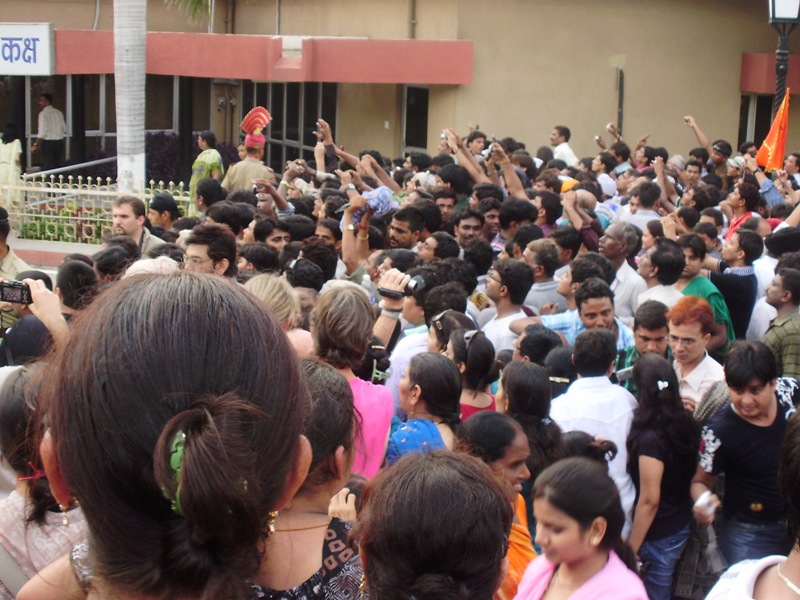 It’s really incomprehensible and comical for foreign tourists. The most interesting is that this whole ceremony is repeated every day. So if you visit Amritsar do not hesitate and go to see this crazy and unique closing performance in Wagah India – Pakistan border crossing. 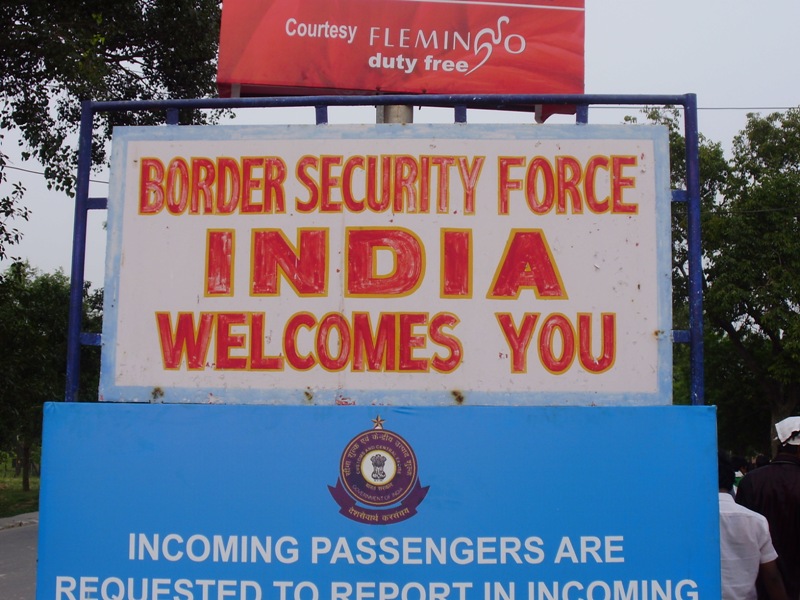