How to travel by train in India – quick guide

India doesn’t have the largest railway network in the world, though it is commonly believed. India comes fourth with approximately 64 000 km of railroad after US, Russia, and China. If the tracks were to be laid out from one point to another around the equator, it would circle it one-and-a-half times. Indian Railways provides an important mode of transport in India, transporting over 18 million passengers daily. It is one of the most common ways of transportation for the western travelers because it is cheap, safe and comfortable. Because I spent dozens of  hours in trains I decided to write this article – quick guide – about how to travel by train in India.

Don’t travel on the roof of the train 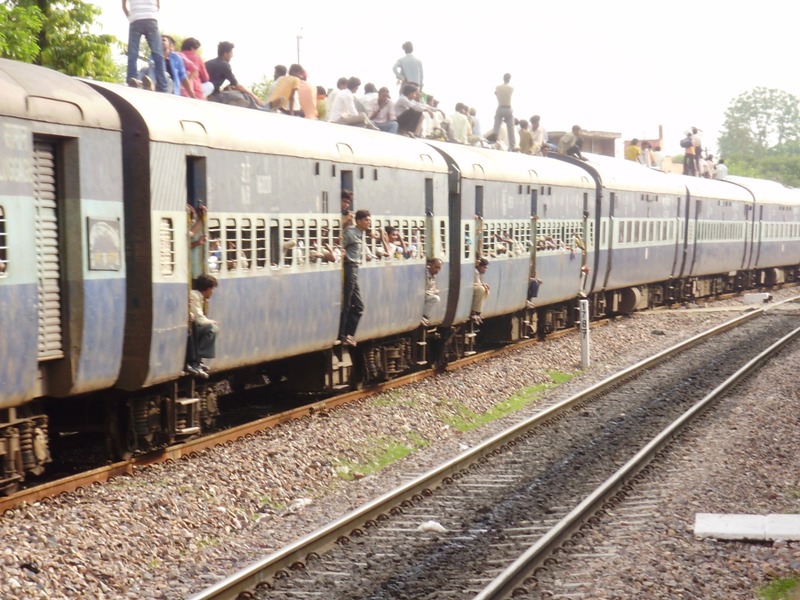 It is dangerous! Some travelers do that because of adventure, but I highly not recommend that. This practice is a serious issue in India where people have been killed or injured in numerous accidents. Although roof riding is banned and has always been illegal, it still does happen in places where local trains are crowded and by people who are travelling without tickets.

Don’t try to get to the train among first passengers 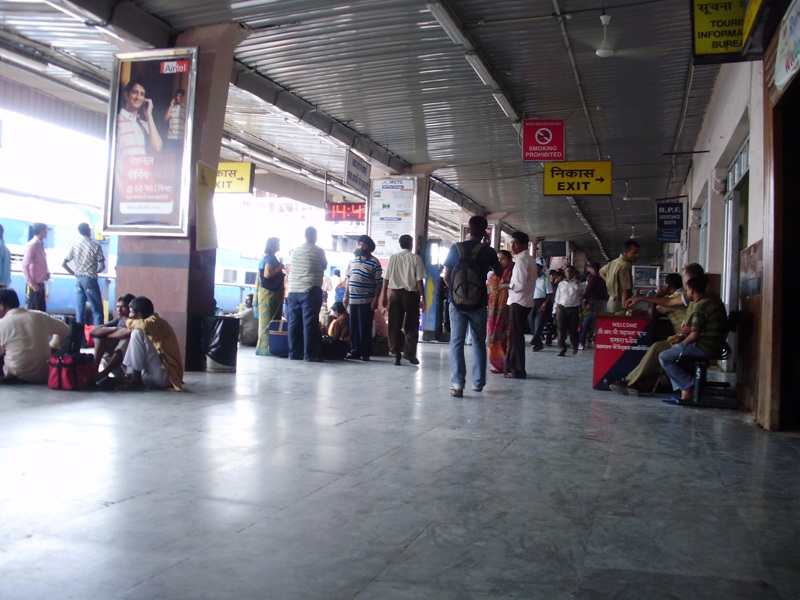 You can do that but you will risk the possibility of death by suffocation. Problem is that all the people from platform try to push themselves to the train, and all the people from the train try to push themselves to the platform, on the same time. Indians do it despite the fact that they have a seat reservation and no one can sit at their places. So take your time and wait until the door will be empty and then jump to the train. 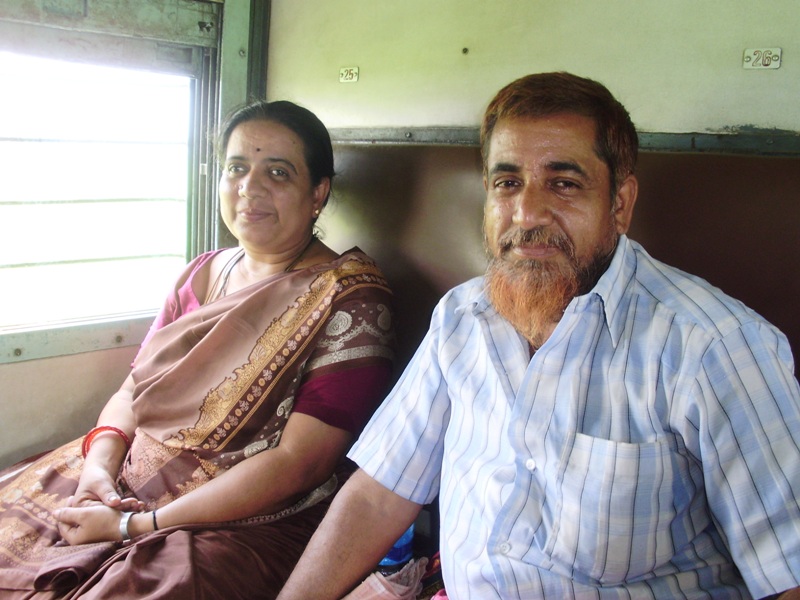 If you are already in the train, you really never know, if the train is the right one. You can ask people on the platform, but according to my experience it is better to ask people inside a train. But many of them will not give you clear answer so you have to ask so many times until you will be completely sure if the train is the right one and you will get to your destination. 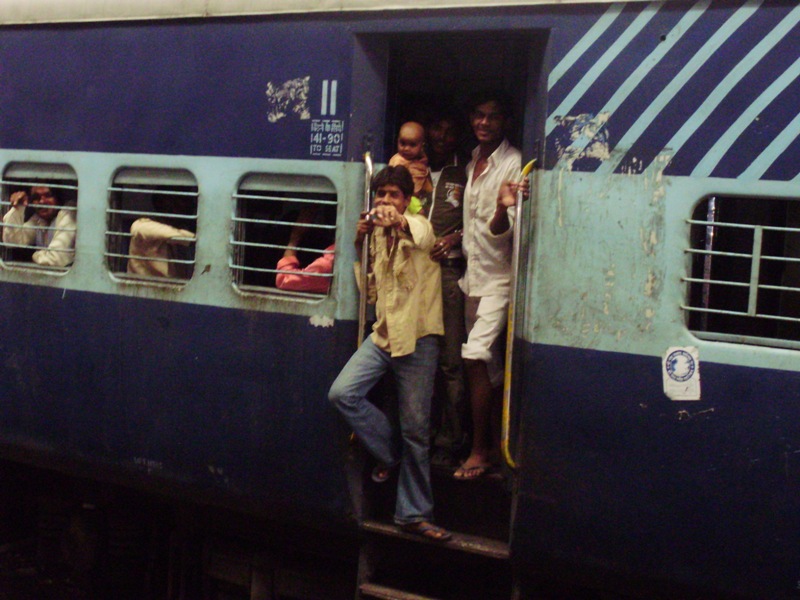 Otherwise you risk falling down. Do not try to jump off a moving train, if it moves faster than the speed at which you can run. If you want to leave a train during its motion, get to the lowest footrest face forward to direction of movement, than jump to the side off the train and run after a contact with land surface. It happen to me once but Indians were so nice when they saw that I am going to jump from the train that they run along the train on the platform and try to help me and catch me. 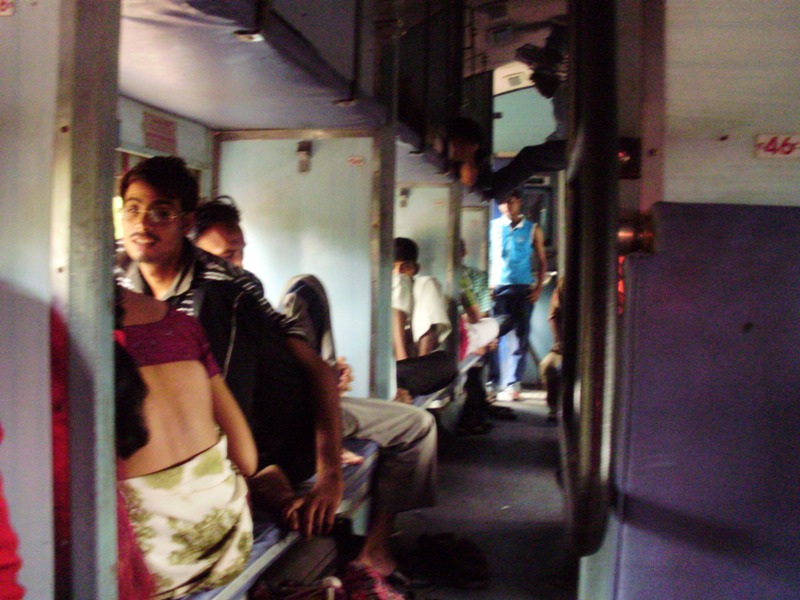 I traveled by sleeper class train most of the time in India, because it has a lot of advantages. I like that there is no AC, because Indian trains are famous for its strong AC and many people get sick after train journey. It is quite logical, because sometimes the difference between outside and inside temperature is 20 degrees. Sleeper trains are comfortable because you can lie and the space is open so you observe can what is happening in a carriage.

Buy ticket to the upper berth 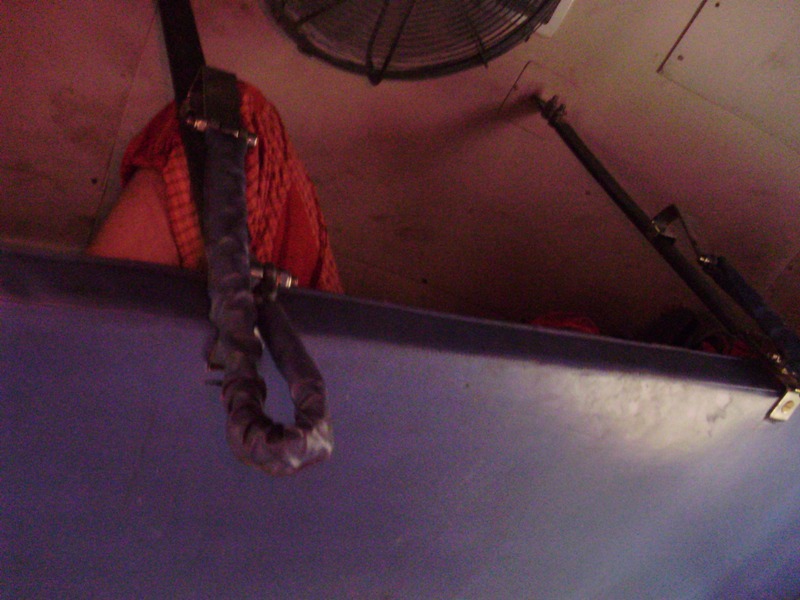 There are 5 possibilities where to choose your seat in the sleeper class train. There is compartment where are 2 lower berths, 2 middle berths and 2 upper berths and department near aisle with one lower and one upper berth. I don’t recommend choosing this department because of luck of privacy, but upper seat in compartment. This seat gives you feeling of privacy and the best is that you can lie down at any time. During a day people create back from the middle berth and everybody have to sit all the day expect people from upper seat. They can choose if they want to sit or lie.

Offer some meal or snacks to your fellow traveler 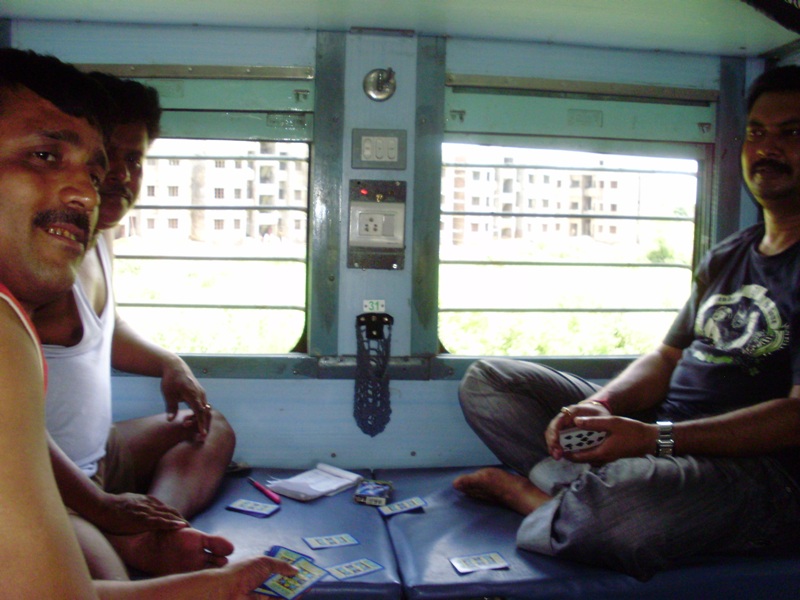 It is a great way how to start conversation and friendship with your fellow travelers especially from India. They will probably do the same so you will have great opportunity to try some homemade Indian food from different parts of the country. Making friends was very important for me in the trains, because when I spoke with someone or play some games, time ran out faster and never endless hours of train ride wasn’t suffering but became an amazing experience.

Smoke in the door on the edge of coach 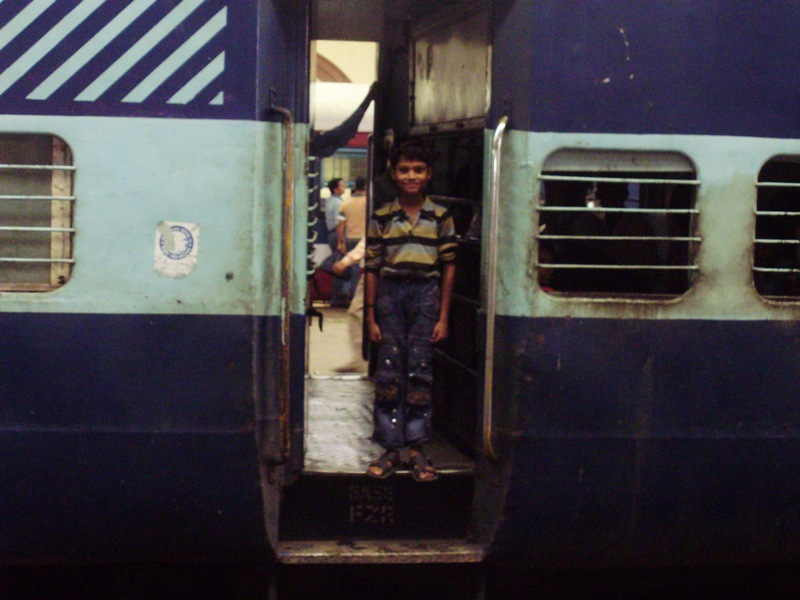 I am a smoker and I suppose that many readers of this article are as well so I consider this tip like important. There is great place where people go smoke. It is near toilets and main doors. You have to be careful because the doors are usually open so it is little bit dangerous when you are too close to them and you shouldn’t be seen by security. I used to go smoke with my Indian friends from compartment who watched the security and let me know. 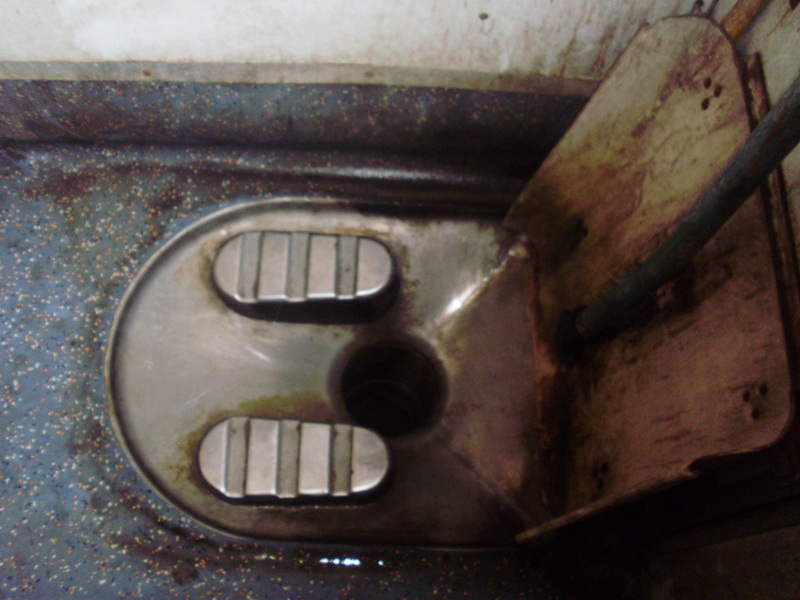 Antibacterial gels are practical and easy to carry so take a stock of it to the train. Even if you have become accustomed to dirt in India, I can assure you that toilets in the trains are dirty. Very dirty.

Don’t give money to crippled childs 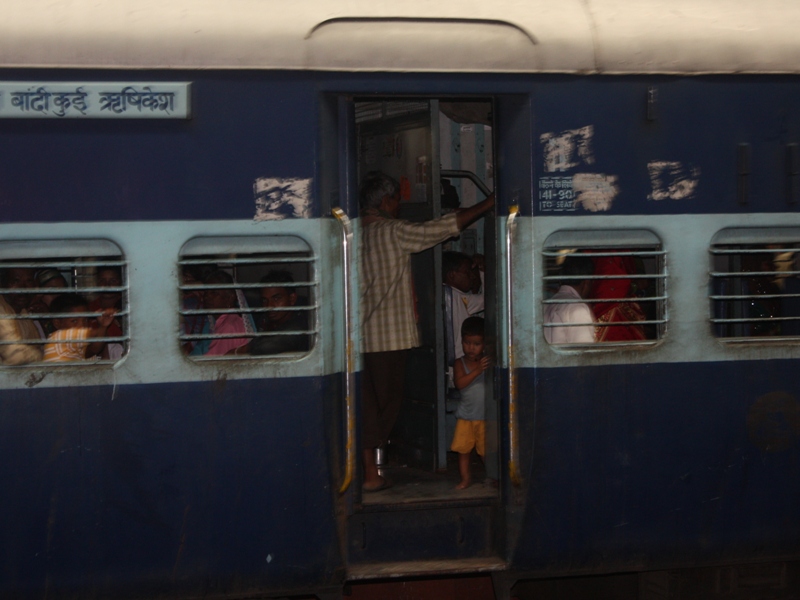 If you do that you will support the mafia that mutilates them. Those childs or people use to get on the train on train station and beg some money inside. When they see western tourist they are more intrusive. Sometimes it can be very uncomfortable especially when beggars are sick, have leprosies etc. In those cases my Indian new friends from the train helped me and politely pleased them to leave.

Don’t look out of the window in the morning 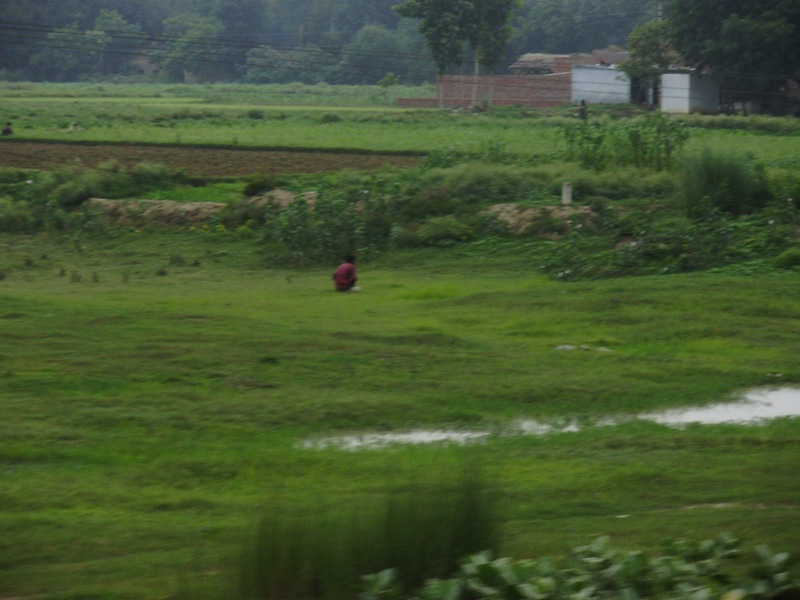 Do that only when you like watching people who are defecating. It sounds incredible but this habit is normal in India. People from villages defecate mostly besides the railway tracks and they never look for cover. It is something like social activity so you can see groups of men walking with containers with water in their hands to use it for cleaning themselves and trying to find place for doing that.