How I got altitude sickness in the city of Leh

In my case, altitude sickness began around 2 hours before we arrived to Leh, capital city of Ladakh in India. I woke up in the minivan with headache, but that time I didn’t realize I experience symptoms of altitude sickness. I just though I got migraine because of dehydration. 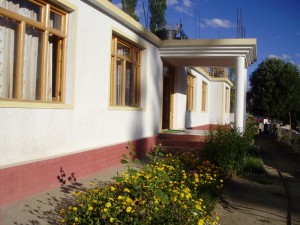 When we got off the minibus we had no idea where to go. We didn’t know where the touristic area of the city is. As we climbed up the hill  from the bus station to the city center with our heavy backpacks, my headache was getting stronger. All of us were so tired after 40 hours journey from Manali, that during first exchange of views about guest houses we fought so much that one of my  friend left us and went to find accommodation on his own.

I and my friend then continue walking up and asking people about some accommodations. When we finally came to the area where guest houses are situated, at the beginning we wasn’t lucky, because everything was either expensive or already full. One nice local woman recommended us Rab Yang Guest House. And I am sure that staying there was the best decision we could make.

Owner (his name is Colto) with his family welcomed us warmly. He gave us nice room, good price and immediately bring us herbal tea. From that moment this family became my second family – my Himalayan family. 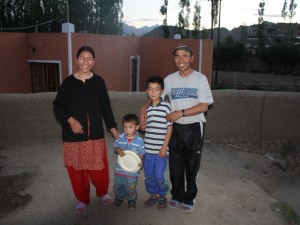 But..after hours of walking in the sun and trying to find accommodation I felt badly. My headache became unbearable; my eyes were sensitive to light and I was nauseous. Colto asked me what is wrong with me. When I explained him how I feel, he immediately stated that I got altitude sickness! He told me that I shouldn’t move from my bed for at least 24 hours.

Altitude sickness is very unpleasant, because there is no medicine that can help you. So I suffered all night. It was one of the worst nights ever.

And how I felt? Really badly!! My headache was maybe 10 times stronger like I experienced before, I felt that my head and neck were swollen and I felt pulse on those parts of my body. My breathing was very slow. Actually I realized each inhalation and each exhalation. Under the normal circumstances breathing is automatically controlled, but during altitude sickness you are aware of it. I had dry blood in my nose and throat. And there was one aspect of altitude sickness, which were extremely uncomfortable – psychological issue. All the time, but especially at night, I had anxiety and panic attacks. I thought I am going to die. It was real human suffering without any possibility to ged rid of that. 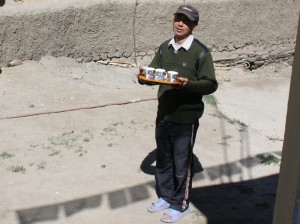 Colto took care about me all the time

The next morning I felt better. I still had headache and pressure in my head and neck, but not so strong like the day before and during the night. I lay in bed all day and all night. I went only to the toilet. Colto was in charge, controlled me, prepared herbal tea and took care of me. While I was lying in the bed, the pain gradually disappeared.  But when I stood up I immediately got sharp pain to my head and my head was spinning.

The day after I finally stood up in the morning and I felt strong enough to go for a short walk to the city. My altitude sickness was cure!

Before I went to Himalayas I read a lot about altitude sickness, but I never thought how bad it could be. I think none of the people who didn’t have personal experience with altitude sickness cannot imagine how horrible one can feel and I would not wish my worst enemy to get it.

Every human body reacts different to altitude sickness. If you have your own experience, please write about that below.

Symptoms of altitude sickness usually develop between 6 and 24 hours after ascending to high altitude.

Common symptoms of mild altitude sickness (sometimes called acute mountain sickness) can be similar to a hangover. The symptoms are usually worse at night.

worsening of the symptoms described above

breathlessness (even when resting)

a bubbling sound in the chest

What to do if you have symptoms:

If you have symptoms of mild altitude sickness, don’t go any higher for 24 – 48 hours. If your symptoms don’t improve or get worse during this time, you should descend immediately.

Severe altitude sickness is a medical emergency. Someone with severe symptoms should immediately descend to a low altitude and seek medical help.