…I am getting closer to Manikarnika ghat – primary cremation ghat in Varanasi.  While I am going down a narrow street, I still cannot see it, but I feel it: in smokescreen from the grim faces of guys, from their faces which are smeared with coal dust. They walk in big groups with huge axes; they are wet from sweat and moisture. They try to chop wood so inhumanly thick as human body requires to be burned. And I can see Manikarnika also in the haircuts, which is worthless lying on the street outside the shop with the burial cloth. I can even hear it in the silence that is so unusual in the Indian cities. I hear only crackling fire and sounds of axes as measure time in the endless cycle of life across the history. 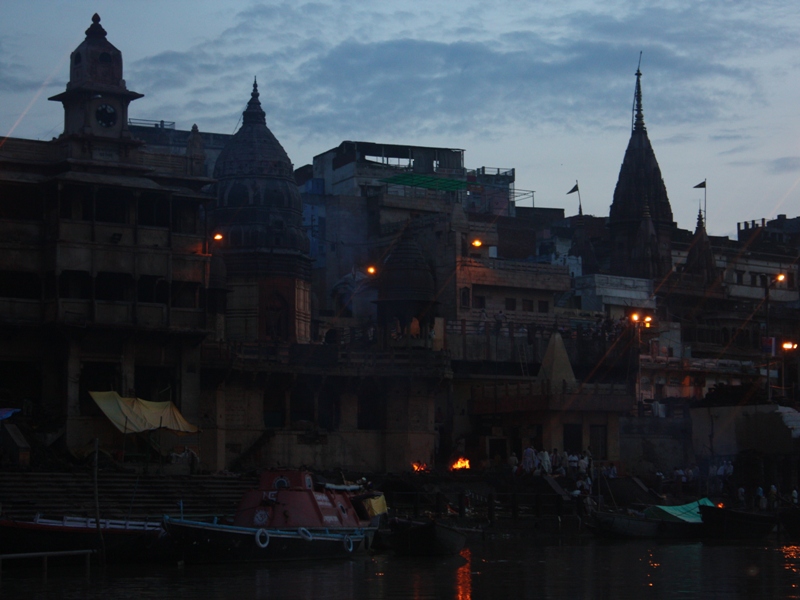 I am walking around the building to which passes smoke throughout the ages. It is a hospice for elderly people who choose to die in Varanasi. Hospice with view to death. Grandfathers and grandmothers are lying on the concrete floor, waiting for the death – weeks, months, even years. They are shrouded with smoke that flows to them from the unglazed windows without break.

I am coming to the funeral pyres. It’s dark. Smoke is too thick and pungent. I’m standing right here; sometimes I have a problem to catch my breath. Tears fill my eyes. The whole scene is extremely atmospheric. I see burning body behind tears.

I look around. There are burning fires all around. 10 maybe 15. Fires burn 24 hours a day, throughout the ages. I feel the accumulated power of life and death, which remains here for centuries. Fires have never been quenched in Varanasi. Grieving families dressed in white are standing silently over dead relative. No one cries at these funerals. They are standing and gazing into the fire, which has become redemption for their relatives from the endless cycle of life.

The silence is interrupted by shout. It is very loud shouting. I look behind me. Two frightened little girls scream  so loudly that I was suddenly ripped from the place where time was stopped. This shouting gradually disappear in the labyrinth of narrow, dark, smoke-colored streets where the other funeral processions led by the eldest son with a shaved head march carrying dead bodies on their last journey. And again there is a silence – neverendless silence and peace.

This place usually gives a person serenity of mind and soul. It gives awareness of yourself. It gives awareness of life itself to which people often forget. Here is suddenly everything so unreal but at the same time you are experiencing the most realistic feeling of being. Each place in India offers its own lesson and Varanasi is a lesson about death and temporality of things …